Why is my hermit crab laying upside down

This is the place to post if you have questions and aren't sure where to ask them! If it relates to one of the sections below, please post there instead.
Post Reply
8 posts • Page 1 of 1

Why is my hermit crab laying upside down

My hermit crab has been laying on his back for a couple of days and today is curled up in his shell. I am concerned about him, but dont want to move him. He did seem to move a little when I turned the light on, but still laying on his back.
Top

Koda wrote:My hermit crab has been laying on his back for a couple of days and today is curled up in his shell. I am concerned about him, but dont want to move him. He did seem to move a little when I turned the light on, but still laying on his back. 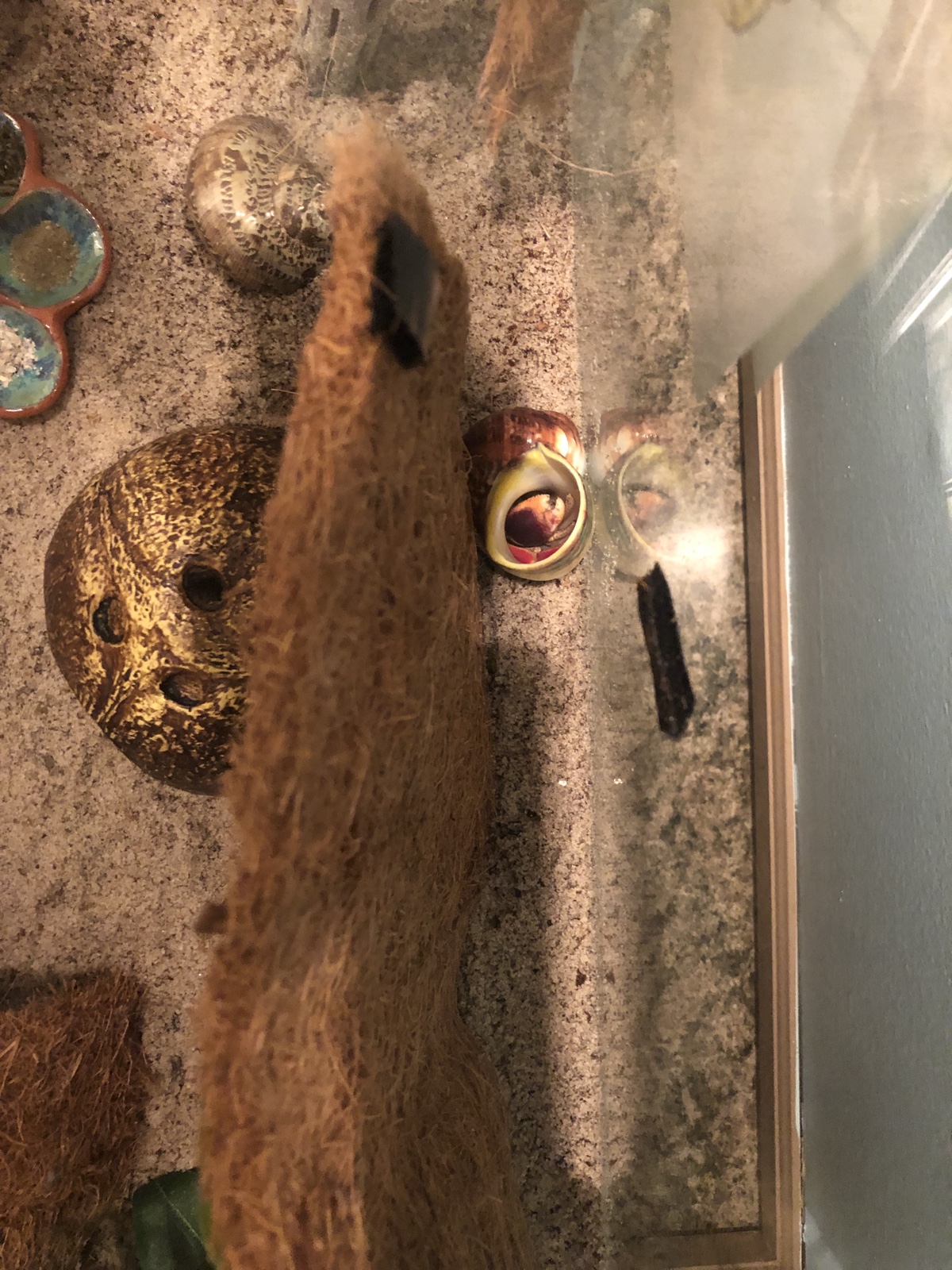 This is the hermit crab in question. He is a fairly new crab and has been in this tank for about 2 weeks. He was in a painted shell and he changed over to a new shell. He was fairly active at first but now not so much. He’s been in this same position for 4-5 days. Just recently curled up though.

The tank is a 20 gallon with 2 med-large crabs in it.
The substrate is 5:1 ee:sand about 8 inches deep
2 water dishes with DC primed water and DC instant ocean and no sponge and deep enough to submerge
Variety of diet that has been purchased from crab food stores on Etsy.
Humidity is staying around 75-85 and the temp is around 75 usually. Digital gauge from zoomed
No heat source but looking into one for the winter
Food and water changed daily.
There is a camera in the tank so we know he is not moving around at night.

Don’t want to mess with him and there is no smell but worried about him. Any suggestions or comments and concerns are helpful.

*this is my mom’s crab and her post I am hijacking.
Top

Personally I would gently pick him up and turn him over above the substrate to see if he falls out. If he doesn't maybe gently tap his pincher with a pencil or something. See if he twitches. If not, sniff him closely. Even if he doesn't move, but there is no smell, I would put him back, facing down. I know they say there's not always a smell, but the couple of crabs I had that died, smelled like dead animal. Not necessarily dead fish.
However, someone with more experience hopefully will advise. I've been at this for 2yrs and don't know nearly even most of what we need to know. Well, that's how it feels. Lol. Keep us posted.
raising son's dog, Dante. Husky/hound.
Raising daughter's hermit crabs, Shelder, Paras and Derek. Added 2 more of my own (of course) Pete and Stryper. Former mommy to 2 guinea pigs and beloved cat, Nissi
Top

Given where he is, there is a very small possibility that he may have got himself stuck between the glass (which gives him no purchase to move himself) and the cocomat (although it looks like he should be able to pull himself up by the cocomat. . . just not sure). I would gently take him out of there, and put him somewhere fairly well protected (in a hidey maybe), facing down. If he does seem totally limp and start to just fall out of his shell, then you have an emergency--go to that forum and look at the advice there. Since he's new, it's quite possible he is experiencing "post-purchase syndrome," in which case all you can do is provide the best conditions possible and hope for the best.

Other possibilities--there's aggression going on and he's just afraid to move because the other crab keeps messing with him whenever he moves. He's only just moved in, and that is an invasion of the other crab's established territory, so that could very well be the case. Once you put him somewhere else facing right-way-up, see if you can watch for awhile (from a distance) and see what happens (or at least smooth the sand down so you can tell later from footprints who has been where). Aside from the territory invasion, the most likely cause of aggression (assuming you have a good varied diet offered to them) is "shell envy." Do you have enough extra shells of appropriate type and opening size? Since they are both in polished turbos, you'll need to have about 6 more polished turbos (I've never had a PP change to something else once it has adopted a polished turbo, those seem to be a PP's ideal shell); ideally you should have 2 each of a tad bit smaller opening size than they are in now, about the same size, and a tad bit bigger size.

hello! yes thank you everyone for your comments and suggestions. I moved the cocofiber wall and he came out of his shell some and trying to flip himself upwards. I did help him flip over and he is up and out with his antennae fluttering!!! so relieved and excited now!!

I'm not overly concerned about aggression as they came in as rescues together. He is a tad bit bigger than she is and they liked to lay together at night. I have 11 shells of varying sizes to help prevent from any shell fighting. Try to have 6 different types of food in the tank at all times along with some fresh foods and 2 types of protein, some honey, green sand, exoskeleton boost and some egg shells as well.
Top

Yes, so it sounds like he got himself in a position back there such that he couldn't turn himself over. Maybe it would be worthwhile to pull the cocofiber wall out at the bottom and prop it out so that it always makes a triangle with the back glass wall and the substrate? With enough room for them to go back there and hide while having plenty of room to turn around in. They really like having places to hide, but a glass wall is a completely unnatural thing for them to have to deal with, and being somewhat pressed against that by the cocofiber wall may be what created the situation where he couldn't get enough leverage with any of his legs to get himself out.
--{}: Dragons Fly Farm --{}:
Resident PP's:"Major Tom" "Billie Jean" & "Mr. Jones"
Keep a good thought--they're rare these days.
Top

Another alternative I guess would be to hang the cocofiber mat higher, so that it is an inch or so above the substrate at the bottom. They could still grab it and climb up on it if they are climbers, but if they went behind it and lost grip, they'd just fall to the substrate and thus out from behind the mat, not be stuck at the bottom trapped between the mat and the glass.

Putting it out triangularly, though (if it is thick/stiff enough to do that ) would have the added benefit of a big place to hide.
--{}: Dragons Fly Farm --{}:
Resident PP's:"Major Tom" "Billie Jean" & "Mr. Jones"
Keep a good thought--they're rare these days.
Top

Thank you for the suggestions! It does seem as though he was stuck and so glad to have gotten him out. I rearranged the crabitat yesterday, and hopefully eliminated that problem from happening again. Thank you!
Top
Post Reply
8 posts • Page 1 of 1