This forum is where you discuss issues relating to molting hermit crabs, including pre- and post-molting issues. If you are having a molting emergency please post in the Emergency Forum.
Post Reply
160 posts

maybe he is getting ready to molt.
I love my little Acorn! #besthermitcrabever
I also Love Jesus! My favorite food is doughnuts, my favorite drink is orange soda,
and my favorite color is gold! (I like shiny things)

Oh no! Come on Eddie! He’s made it so far!! I do so hope he decides to stay in his shell... I wonder if it’s any better or worse that he only does it when in the water right now, rather than finding him streaking already...?
I guess it’s almost as bad either way, I’m just glad he decided to get back in there and keep fighting! Oh wait it’s not a boxing ring... but it is a big fight. Sending him lots of crabby healing thoughts! Come on Eddie! He has to be close to ready for a molt. I wonder if he is ready to be put in the dark and left quietly? I wonder if that would keep him shelled and ready to molt? Idk, you are much more experienced than I am, I guess it’s second nature to try to figure them out! I wish they could communicate in more ways we could understand. I know they DO but we big dumb human....
get well soon Eddie!!

Crabs don’t go out of their shells to molt.
3 Clypeatus or maybe two idk
Goodbye my little E. See you soon.
Crabbing for over two years!
Top

AwesomeHermit wrote:
Crabs don’t go out of their shells to molt.

Sorry, I don’t get it. Crabs (obviously) don’t go out of their way to tell their owners that they will molt.
3 Clypeatus or maybe two idk
Goodbye my little E. See you soon.
Crabbing for over two years!
Top

E’s are notorious for ditching shells, and they will do it if: They feel threatened, they have something stuck to their abdomen, they lack energy to carry the weight of a shell, if someone picks them up and they don’t wanna be picked up (could also fall under “they feel threatened”.)

No, they do not remove their shells specifically to molt, but there are reasons why crabs go without shells at times.

Motörcrab wrote: Thanks, we have been really trying to get him back into shape. As long as he has the will to keep fighting we will be there to help him.

It's funny you say he is a trooper. Eddie is named after Iron Maiden's mascot and The Trooper is one of their most popular songs!

Tonight there was no streaking from Eddie or myself. Lol! I'm hoping that was a one and done incident.

Eddie's appetite was ok, not the best tonight. He picked at some bee pollen and turkey, possibly a little exo repair mix too. The rest he didn't touch or wasn't enough to tell he ate any.


Sent from my Pixel 2 using Tapatalk


I used to have the Trooper poster on my wall for ages, along with an Iron Maiden bumper sticker from the early 80’s that had never been stuck on a car.

I hope he is ok
I have had pets in the past, but my family can’t have any furry or feathered ones due to allergies. I usually try my best to help and currently trying to set up a crabitat. I also try to treat others with Love!❤️
Top

We thank everyone for their healing wishes for Eddie. He has been put in a molting "bed". Heat and humidity are being closely monitored, there is a camera on him. All we can do is wait it out now. We are worried and hopeful. Only time will tell, and it's going to be a hard time. All his feedings & watering, baths have been documented. He is our baby and we love him so very much. Thank you all for your suggestions, help and support.

I just reread the care guideline again for attacked crabs, especially the time lines of when crabs started molting.

From the four other similar lost limb crab topics members experienced they all started their molts at different times. There are three factors with the timeline I can think of. How soon they were discovered after the mishap and how much energy they had, how much food and water they were consuming, temperature of their ISO.

This is Day 25 for Eddie since we discovered him missing limbs in the substrate. It is impossible to guess how long he was actually unable to move underground. Since he had energy when we found him it was probably only a few days. I know for at least two and a half weeks I thought he was eating A LOT of everything. Perhaps with spending the time hand feeding him allows him to eat more than he would on his own? I always start with calcium, proteins and bee pollen followed by fruits, veggies, and plants.

Since Friday or Saturday I have noticed a decrease in his appetite, picking on select foods. Perhaps that is his sign of getting ready to molt. I know wodesorel said her Sunshine completely refused food and water and started flipping around. That was her way of showing she is ready to molt. Perhaps Eddie is ready but still picks at food? I'm hoping his coming out of his shell in water his way of telling me he wants to molt and can't because I disturb him twice a day trying to feed and water him? Unfortunately every crab is different with their behavior, and actions. It is always mentioned on the forums here.

It is also said crabs may switch to a larger or smaller shell before molting. With Eddie being in ISO and injured I never added any extra shells. I assumed he wouldn't want to swap while injured.

Anyway, back to Eddie. After thinking my above thoughts and about him all morning at work and checking my Crabby Hospital Cam, yes that's what I call it, I decided to place him in the substrate for molting.

When I got home he was laying half in and half out of his shell. I did notice him moving in and out several times earlier. I dug a hole about 3 inches wide in almost the center of the tank. I misted the substrate and places some moss at the bottom of the hole. Just in case he isn't quite ready to molt I put two swabs of food in the hole for him. One is raw honey and bee pollen, the other is peanut butter and brine shrimp eggs, yum! I also ground up more crab and lobster exo along with some Azomite. I placed all that in his molting hole. Once his molting hole was ready I told Eddie good luck and it's up to him and put him in the hole. I placed a coconut hide over the hole with more moss covering the opening. The entire ISO tank is covered with Insulation on the sides, 90% of the back is covered with a Zoo Meds UTH. I also placed a towel over the glass to to make it dark.

I really hope I am making the right decision for Eddie right now. I ran through other reasons why he would ditch his shell. I don't think he is weak with how he has been eating. His abdomen seemed HUGE to me. I'm thinking he should have plenty of energy. I thought because I changed his ISO a few days ago and the change stressed him out. I went back to how it was and he did it again. Most of his actions and what I noticed all lead me back to thinking he's ready to molt. I just hope I am right going with my thoughts and gut feelings on this.

My appoligies for the extremely looooong post. My brain has been swarming with all these thoughts all day. I needed to get them out and hopefully someone can help justify them. 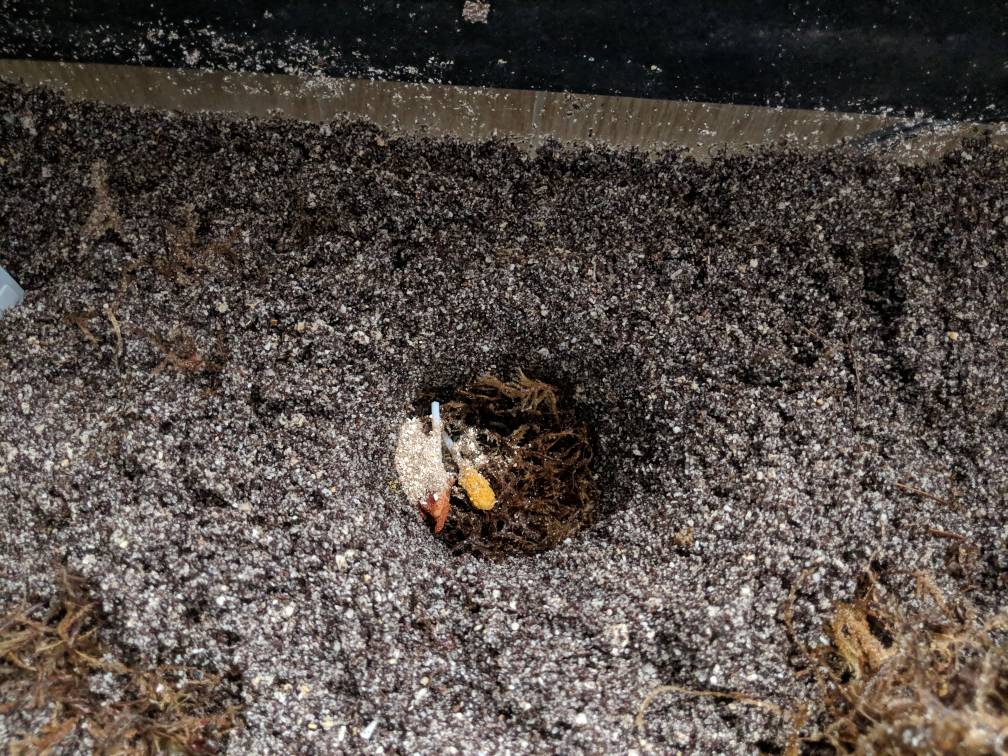 Eddie after being placed in his molting hole. 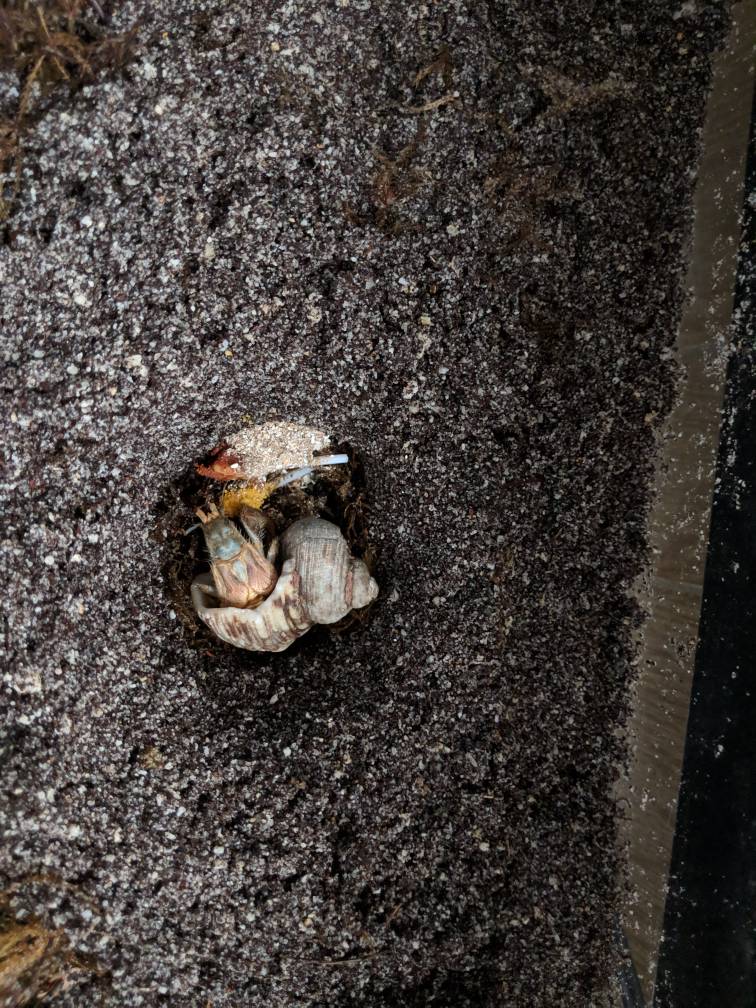 ummm, im a he not a she. its okay though!

I love my little Acorn! #besthermitcrabever
I also Love Jesus! My favorite food is doughnuts, my favorite drink is orange soda,
and my favorite color is gold! (I like shiny things)

I did know that. I’m sorry.

Wishing Eddie a successful molt! We’re all rooting for you, Eddie!!!

its okay, you didnt know!

i have been praying for you, eddie!
I love my little Acorn! #besthermitcrabever
I also Love Jesus! My favorite food is doughnuts, my favorite drink is orange soda,
and my favorite color is gold! (I like shiny things)

I've got my fingers crossed here. I think all your thoughts on what is happening are valid. That abdomen is extremely swollen which can be good or bad, unfortunately. They're so tiny it's not like they can be palpated to find out how individual organs are doing.

E's are also notorious for having molting issues, and the initial attack may have caused more internal damage that you can't see. Hopefully he's just scaring you! I hate this part so much.
Top

if you are religous, let us pray. if you are not religious, wish him well. we need all the help we can get from our members.

you have done so much for your crab, i hope he knows what a good owner you are!
I love my little Acorn! #besthermitcrabever
I also Love Jesus! My favorite food is doughnuts, my favorite drink is orange soda,
and my favorite color is gold! (I like shiny things)