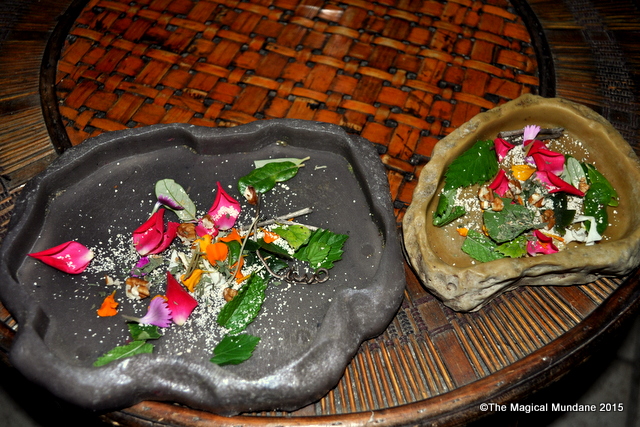 CrabbyEmerson wrote:
Starting at the top, going clockwise: eggshell, dandelion blossoms, applesauce, blueberries with honey, dried shrimp, raisins, and bell pepper. In the center is some leftover bits from the other day; kale, seaweed, raspberries, mango, and red bell pepper.
I think I went a little overboard... It's just so fun to prepare meals for the hermies!

I love how you organized their food. Super cute! Is that the bottom to a chicken waterer?
~Jessica~
Crabbie mom of 19 PP's: Kingler, Adventure, Time, Sebastian & Penelope plus our new adoptions; and our little angel: Krabby (PP)
Top

Last night I put in two dried blueberries, two dried raspberries (small ones), some dried elder flowers, my dried greens mix, and 2 mealworms, a cricket (cut in half), and a shrimp (cut in half) from a mixed container. I'm really excited because someone (probably Boromir) ate a whole mealworm, the whole shrimp, and half of the cricket.

It looks like he ate some of the flowers & greens as well. Fruit was unfortunately untouched. They don't seem to be fans of blueberry & raspberry whether it's dried or fresh. :roll: Maybe I'll try cutting or grinding them down finer & see if that makes any difference...maybe it's the size + the stickiness?

Tonight I left in all of the leftovers from last night, and added some more elder flowers, a pinch of dried bloodworms (they've devoured those in the past) and some of my nut/coconut mix.
Top

Yard sale all weekend at my mom's out of town so they have honey, basics mix from Hermit Crab Addiction, bah humbug mix, mealworms, leaf litter, worm castings, eggshells, and dried fruit mix. That should hold them for a few days, the little piggies!

Tonight the crabs are having banana, dehydrated carrot and carrot tops, dried shrimp, and a piece of snow crab exo.
Top

Fresh strawberry, banana, carrots, egg yolk all topped with some calcium powder and some treat mix powder that's like strawberries and honey and something. There's also egg shell and dried bloodworms. However, none of my crabs seems to want anything to do with any of the proteins I've put out so far

Squidoo, peanut butter popcorn, and ground pumpkin seeds in one dish. Dried jumbo krill, coconut banana mix, and two pieces of frozen shrimp in the other.
There's some leftover powder mixes in the "wet" dish, but they weren't crazy for any of them so I didn't wash it completely. See if it'll peak interest any.

No picture, but today's bowl has freeze-dried beef liver, 2 mealworms, 2 shrimp, & one cricket cut in half (from a medley jar), barley grass powder, celery seed, some of my homemade dried greens mix (which they seem to love so far), dried peach, dried jicama, and elder flowers. The supplements dish got fresh earthworm castings, HCP's mineral supplement, and bonemeal powder. I need to switch the flower mix & leaf mix bowls, but I'm going to wait & do that tomorrow along with changing water because I'm trying to finish some packing tonight.
Top

I had to take a picture of today's bowl because it was so pretty & colorful.

And then because I was amused at the contrast, I took a picture of my dinner:

Maybe someday I'll eat as well as my animals.

), chicken breast, strawberry snack and cuttlebone...it was a lazy fresh bowl night after I made what can only be described as chicken paste in the blender and, of course, the liquified liver. I now have some really odd stuff in my ice cube trays

I shared my breakfast this morning with my crabs. To their great pleasure. I had an omelet with green peppers and ham- I took out a bit before I added my paper and what not. The crabs were in love. My big Indo sat in the food dish for close to an hour stuffing her face!