I can't handle it anymore!

Please post here if you are having a crab care emergency! Use a real subject and not just "HELP!"
Locked
67 posts

wodesorel wrote:Try the q-tips coated in honey and the rolled in something dry like crushed shrimp or shredded coconut. It really just depends on what you have on hand, think powdered and nutrition packed. The honey is a definite benefit, but it's also used for edible "glue" to hold everything else into place while he eats. Hold that up to his mouth, and if he's able to eat he will. I would not recommend smearing anything on him directly as that can lead to bacterial infections if he's unable to clean himself off. If he can't eat because he's too injured...

For some reason I always thought I seen my guys when cleaning themselves take the "dirt" off them and trying to eat it... Thats why I suggested trying to rub a tiny bit somewhere, so when he cleans himself he takes it off and eats it. But I do see your point to and realise that my method isn't very safe for the crab; not to mention the added labour it will take for him to clean himself...
What was I thinking?

You had the right idea Aussie! Smearing food on an animal in attempt to get them to eat is pretty standard. For anything that grooms themselves it's an easy way that is much less stressful than force feeding. The problem becomes if it's a mouth injury that is preventing them from eating, or the animal is too weak to groom. Then you end up with food that will rot quickly and harbor bacteria stuck on a part of their body, and the only way to get it off is washing which is even more stressful. My other worry is if there is damage to the face then having food stuck in an open wound is also not sanitary.
Want to see all my crazy pets? @waywardwaifs on Instagram
Top

Thanks for the suggestions guys!
Problem, I'm way to nervous to open the iso this morning. He's not turned to me so I can see him. I'm too scared about what I may find

I'm also worried that he physically can't eat. He can hardly move anything. I've already said this but he's half covered in peeling exo. I haven't seen his mouth parts at all since I found him, but maybe once, and they didn't come out very far. So I'm worried that he literally can't eat

I just need to open the iso and see how he's doing and get him some food and water.
Crabbing since July 2013!
4 PPs - Chloe, Tani, Kono, McGarrett
Top

If he does have a substantial amount of exo on him that's peeling off, it needs to be removed for him to have a chance at survival. If you can post pics, we can confirm for sure, because I've seen other keepers think it was peeling exo in the past but it turned out to be injuries instead.
Want to see all my crazy pets? @waywardwaifs on Instagram
Top

Please tell me you don't want me to peel it off...

I think I read recently about someone removing exo from a crab whose exo got stuck.

If it is confirmed, just hold your breath and jump!
Top

Wow I was not ready for that! I'll do what I have to though (anyone interested in coming over to nurse him with me

)
Good news! He's still alive and I got him to eat some peanut butter with cuttle bone and he drank some water. He was a little hard to convince at first but the water got him going. I spent about 20 minutes and stopped when he seemed like he wanted to explore more than eat.
I was able to catch a few pictures, but they aren't really good
(It looks like sand on his eye but it isn't. I'm sure what exactly) 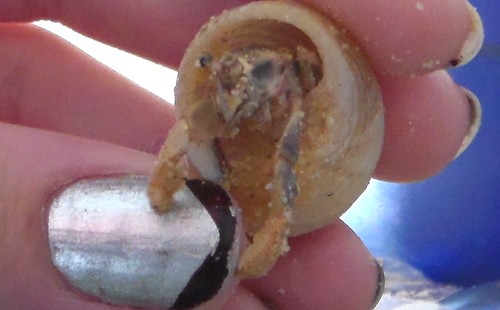 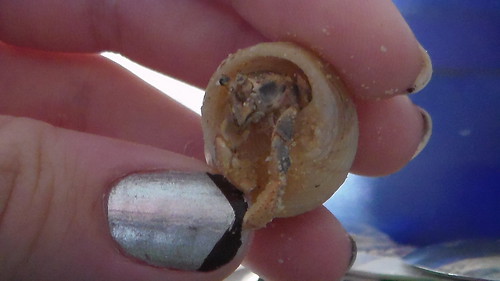 How often should I feed him? And for how long, until he doesn't want more food? Also should I offer him fresh and salt water when feeding him?
Crabbing since July 2013!
4 PPs - Chloe, Tani, Kono, McGarrett
Top

Oh my gosh!! I'm so sorry this happened!! Glad he is still alive and eating.
(sorry, I don't know the answers to your questions, just wanted to say I am sorry)

I felt like I needed to feed him again. I tried a banana that I kinda mashed a little. Goodness, he attacked that thing

Put him back and propped him in front of some food. Should I feed him again later or just let him be? I don't want to stress him too much.
Also I got a good look at his eye. I don't think it's exo that's covering his eye, I think his eye has been badly injured. From the looks of it I think he may be blind in that eye

I don't know about hermits specifically, but isn't him wanting to eat at all a very good sign? Animals that given up on life often stops eating.

Hope it works out for you.
Top

I haven't been doing this crabbing thing long... But I would assume feed him as much as you can, especially since he seemed so hungry with the banana. Maybe try every couple hours or so and increase or decrease feedings based on whether he seems hungry or not. Maybe he's building up his energy to molt? I would also assume he needs both fresh and salt water right now. I hope someone more experienced gives some advice though! Like I said I'm kind of a newbie...

it breaks my heart. I hope he gets a crab miracle and pulls through.
Top

Thanks guys. I think I may feed him again around 8 or 9 then go off how much eats for when I should feed him tomorrow.
It's so sad that he went from this 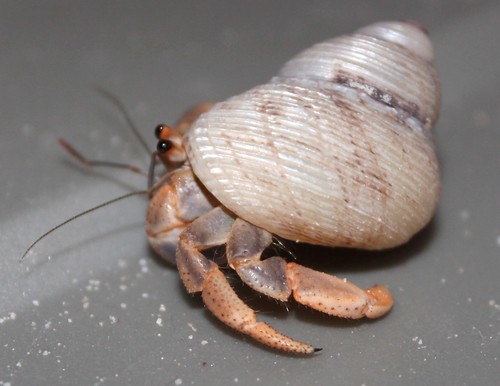 to this, is less than a month

Aww don't blame yourself. They're wild animals! We can only do our best and hope for good luck. Sending you good vibes! The one thing that stuck out to me on your questionaire was the food. It sounds like you aren't offering a wide variety of proteins and that can lead to cannibalization (but Es are prone to being cannibalistic just because they can). I'm not saying this is your fault! They're wild animals and they operate the way nature tells them to. I would add cooked unseasoned meats and dried insects to their diet, along with crustacean meat like shrimp. If I remember correctly, there's something in crustacean meat that they need to survive and they will eat each other to get it. I think I read something like that on a thread here at the HCA, but I don't remember & don't have time to look at the moment.

If you feel that you need to rehome the Es, do what you have to do. One of my Es killed two PPs and attacked PPs and Es alike, sometimes resulting in missing limbs, and eventually I rehomed the friendly Es and kept the killer in iso so he didn't kill any more crabs. I haven't had any aggression problems since, but the killer E did die a few months later after a power outage caused him to get too cold for too long. I'm sticking to PPs and am happy with that decision.

Either way, I'm soooo sorry this has happened and I can tell you, I know what you're going through. I hope you have better luck than I did! You're already having better results than me, so your little guy might pull through!
Shuckle (f), Clauncher (f), Omanyte (f), Weedle (f), Ralts (f) : 55gal Crabitat
Top

*sigh* So far the only thing I can get him to eat is banana! He won't take honey, or pineapple

Any other ideas what I should feed him. I won't trust a crab molting that's only been fed on banana. Should I try the cuttle bone on the banana?
He's also pretty grumpy when it comes to water, he doesn't drink any, I just hold him there, he doesn't want any