I can't handle it anymore!

Please post here if you are having a crab care emergency! Use a real subject and not just "HELP!"
Locked
67 posts

Yeah, I would definitely mash some calcium and protein into the banana and try to sneak it in that way. Maybe a little bee pollen, spirulina, or mineral supplement too.
Top

All natural peanut butter with cuttle bone would probably be good for calcium and protein. I'd say the calcium is the most important thing for him right now so whatever you have to mash together to get him to eat it. Have you tried dipping him in the water a little?
Top

I'll have to experiment later when I feed him again.
It's really sweet getting to feed him. Since he has no BP I'm not worried about getting pinched so I just hold the banana and smear some on my thumb. He just picks it up off of my thumb.
He's also looking more like a living crab each day. Hate to say it but he looks like a dead crab that's moving. He's figuring out how to use his leg and claw to eat. This is actually been a neat experience so far

rml6f4 Yes, I hold him in the water (since he shakes if I don't hold him, he can't support himself) and see if he'll take some water. But he doesn't do anything. I think the water may be a little cold. Do you think I should try and heat it up some?
Crabbing since July 2013!
4 PPs - Chloe, Tani, Kono, McGarrett
Top

The water should be as warm as his enclosure, around 80 degrees. He may be able to sit himself up as he gets stronger, and in that case put a splash of water in the bottom of a cup and let him drink himself.

Protein is the most important thing you can give him right now and what he needs the most. If you go with crushed shrimp and insects, that will supply the calcium and fats he needs as well. The honey will provide sugars, but he should also have carbohydrates in the form of fruits. If you can swing it, the king/snow/dungeness crab exo from Alaska Hermit is a godsend for situations like this! I also suggest bee pollen as it's chock full of minerals and vitamins.
Want to see all my crazy pets? @waywardwaifs on Instagram
Top

This is heart breaking! I'm so sorry! The poor baby!!!
I'd definitely put the E's up for adoption and focus on the two PPs for a bit.
I'm really happy for you that he's responding so well to hand feedings though! Have you tried crushing coconut or spirulina powder? What about smashing up some protein: like shrimp? Eggshells are also a great source of strength! Poor baby, all you can do is feed him as much as possible in hopes he will go down to molt and heal.
My crabs are crossing their claws for ya! You're doing an amazing job by him!!

Dumb maybe, but could you provide me with a link?

Drakezilla Thanks for the kind words! I've got a long few weeks in front of me, but what to give him the best shot at life as I can

hermitcrabdc wrote:Dumb maybe, but could you provide me with a link?

Ugh, I should have checked first. She's out of stock at the moment: http://alaskahermit.com/?product_cat=supplements
Want to see all my crazy pets? @waywardwaifs on Instagram
Top

Now I'm totally confused! I put cuttle bone in the banana. He hardly at any, he would play with it and tried to "push" me away, but didn't eat it

But when I put him in warm dechlor water we didn't want to leave! I'm totally lost...
Crabbing since July 2013!
4 PPs - Chloe, Tani, Kono, McGarrett
Top

Poor guy! I had a crab that lost limbs (nothing compared to this) and I fed him the treats from the Hermit Crab Patch website. Right now, make sure it's hot and humid in his ISO. Banana with other stuff like shrimp, cuttlebone, and honey mixed in sounds like the only way he's going to accept it, but it sounds like he doesn't want that. I would make sure it's REALLY mixed in so he doesn't detect the other stuff, just mostly the banana. I rescued a "paralyzed" (a crab REALLY in need of a molt) from a pet store. He couldn't move, so I mixed oats, shrimp, coconut, and rice in water and put it in front of him. He ate that. If you do try that, be sure to replace it everyday because it gets moldy quickly. I soaked him in fresh and saltwater 2-3 times a day, and left some in front of him in case he was craving it. That's about all I've got._.
Happy New Year and Good luck!!!!

Wode, this is what I saw the other day that I thought was exo 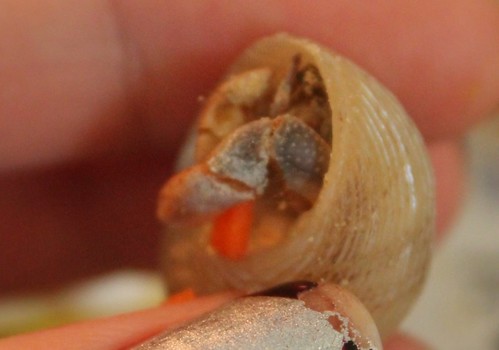 I don't think it's retained exo. I think it's a combination of damage to the skin before it hardened, mixed with the limbs being bent totally out of shape. They're a lot like clay when they've just molted, and unless they're allowed to stay in a normal position with their skin untouched, their limbs can harden in odd ways and they can develope weird discolorations and patterns on their new exo.

That should be the shield leg, with a normal top section and "knee", and then the lower leg is damaged and bent.
Want to see all my crazy pets? @waywardwaifs on Instagram
Top

Nothing really to worry about then? He was eating when I took the picture which may have lead to a weird leg movement caught in the picture. To me it doesn't seem bent weird.
Also I feed him today and finally got him to eat some cuttle bone

! I had to cut the water time short since I actually left family's house to feed him and had to get back before we had to leave for friend's house. Accomplishment, sorry had to share

He's trying to dig down

Should I skip feeding this morning? I don't want to interrupt anything

Fingers crossed for a molt