Please post here if you are having a crab care emergency! Use a real subject and not just "HELP!"
Post Reply
21 posts

Motörcrab wrote:Our Eddie did the same thing in the water. He would stretch way out extending his leg out as far as he can.

This is exactly what he did!

Well we didn’t have long to wait. This morning when I peeked in I panicked because it looked like the shell was empty. Then I saw Sparky had pulled far back into the shell with only his one leg out. He was absolutely motionless, not a quivering antenna, nothing. I sat him in water for a minute to see if he revived. Nothing. But no death smell, either. I put my nose right up to his shell opening and he smelled faintly of peanut butter (I left him noshing on mashed banana and powdered pb last night). 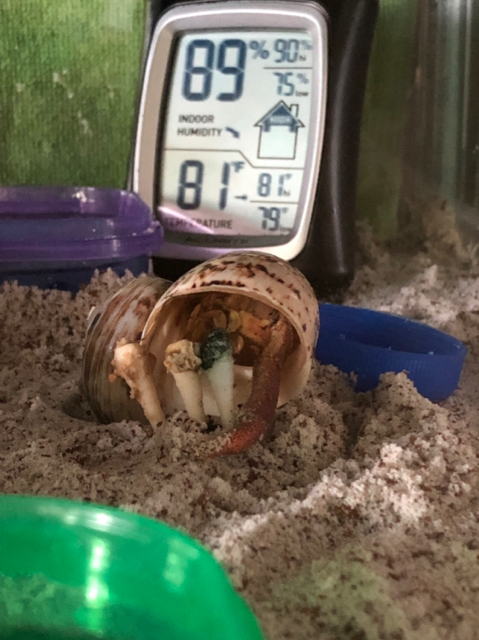 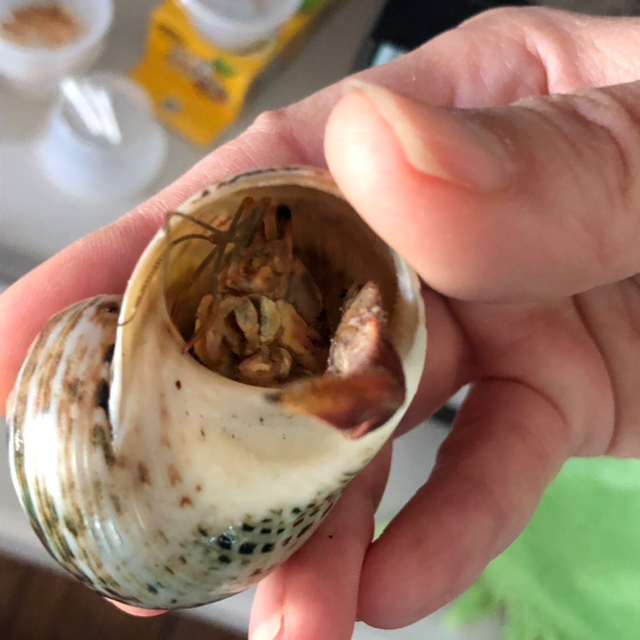 Could he be about to molt? I’ve read they can look lifeless when molting. I made a hollow in the sub and covered him with a coco hut. Should I cover the small openings in the coco hut? Should I put any food or water in with him? How long should I leave him undisturbed before checking for signs of molt or death smell? 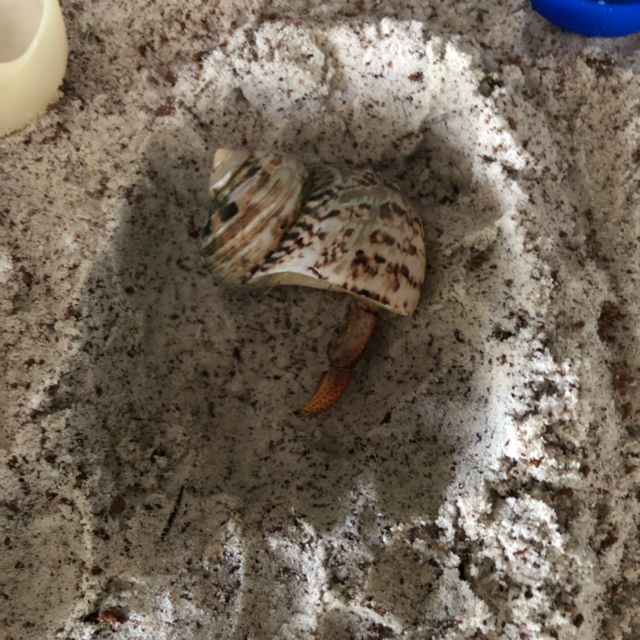 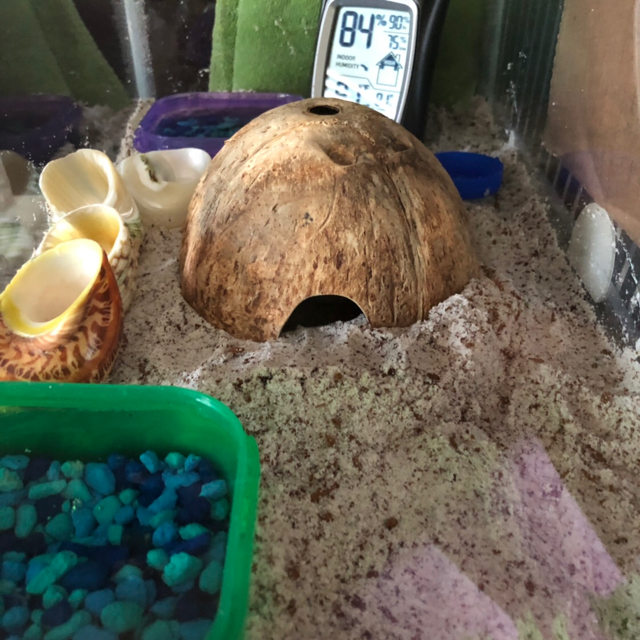 The only encouraging signs right now are (1) he’s inside the shell—our other crabs that died were hanging out of the shell—and (2) he smells of peanut butter, not death. But then our other crabs did not have a very discernible death smell, either.

So to sum up:
Day 1: We find Sparky at evening, presumably attacked, missing 3 legs and both pincers. We iso him with his ab curled up in a shell opening but not properly in.
Day 2: Sparky is properly shelled with help. He takes lots of water but very little food.
Day 3: Sparky is very active, either scraping food swabs or deep sea diving, all day.
Day 4: Sparky has withdrawn into his shell and appears lifeless. He smells faintly of his last meal (peanut butter). I cover him up in hopes of a molt.

I think that what you are doing is good, and maybe add a shell with fresh water and salt water, and check on it every once in a while. But I have not experienced this so you may want to wait for motorcrab.
I have had pets in the past, but my family can’t have any furry or feathered ones due to allergies. I usually try my best to help and currently trying to set up a crabitat. I also try to treat others with Love!❤️
Top

Im not sure if it recommend but I would gently tap on his leg to see if he if he moves it or it wakes him up a bit. Eddie was limp one day when I got him out for his morning feeding. I tapped on his head and it woke him up. Then I began his daily feeding. The smell will take a day or two but you will know if it happens.

Do you have any raw organic honey? If he didn't pass he may try eating that for an energy boost.

Do you know how long ago his last molt was or noticed and change in his color?

If he recently molted, within the last two months I don't think he would be ready to molt just yet.

If you do put food with him in a molting hole with him you will need to change it daily. Otherwise if it molds that can grow on Sparky too.

This is the caresheet I followed for Eddie for his care. If you read near the bottom it has a few people that experienced this and basic time lines of when they were attacked and when they were ready to molt. I believe it with those they were between 17 and 60 days from when they were discovered.

Im still upset I lost lost Eddie even though I know I did the best and everything I could for him. I keep thinking if I tried different things he would have made it.

Yes, I offered it every day on a q-tip, usually dipped in something like powdered bee pollen or cuttle bone, and he did take some.


Do you know how long ago his last molt was or noticed and change in his color?

If he recently molted, within the last two months I don't think he would be ready to molt just yet.

I don’t keep track of when they molt, just kind of keep loose tabs on who’s up and how long since I last saw them. All our crabs were VERY active during the cold spells in Feb, then it quieted down and only 3 are up in the main tank now. I had a good look today and am kind of alarmed at how beefy and dark they all look, no more spindly legs, it’s like they all had a collective massive growth spurt! I’m ordering more shells asap. As for Sparky, his color is kind of ashy and his leg hairs look old, so I’m guessing he was due for a molt. Maybe he got attacked while looking for a good spot...


This is the caresheet I followed for Eddie for his care. If you read near the bottom it has a few people that experienced this and basic time lines of when they were attacked and when they were ready to molt. I believe it with those they were between 17 and 60 days from when they were discovered.

Thank you, I read through all those when you linked them before. Going by those, it does seem very sudden that Sparky went from being active and chowing down yesterday to stock still today, vs. slowing down on eating like the others. There’s still no smell so we’re holding out hope, but it’s possible he passed suddenly from shock or injury or what have you. Since he’s the only one in the iso tank, it doesn’t hurt to wait until we’re sure...


Im still upset I lost lost Eddie even though I know I did the best and everything I could for him. I keep thinking if I tried different things he would have made it.

I’m so sorry about Eddie. I love the memorial planter you made for him. I think we probably all second guess ourselves, it’s so hard when there’s no hard and fast rules when it comes to hermit crab health, I think every situation is individual and we just do our best and help each other out if we can! Thanks for hanging with me on this one, all we have to go on is each other’s experiences so I appreciate it.

Re: Naked and missing limbs... and now maybe mold?

Today is Sunday night, and Sparky has been immobile and covered by a coco hut since Friday morning. We peeked at him very briefly Saturday afternoon, just long enough to determine there was no discernible smell. I was going to wait a couple more days before checking again but my husband was concerned in case he was alive and trying to get out. So tonight we uncovered him and took a better look with light. There’s still no discernible smell, just clean tank. He has not moved as far as I can tell; if anything, he looks like he might be a little deeper IN the shell. He looks a little “flaky”, my husband thinks kind of like a snake shedding skin, but it’s hard to tell. He also has what looks like white fuzz on the joint of his one good leg. My guess is that some food from the q-tips he was scraping Thursday night stuck to his leg and mold might be growing on it.

Questions:
—How long is the active shedding of the exo part of the molt process? How long would a crab remain immobile before/during? We are just trying to put a timeline on when to check on him and when to call it. He’s alone in the iso tank so we can wait as long as it takes...
—If the white fuzz is mold, will it hurt him? My husband questions whether it is mold because we’ve blocked all light sources (except the 2 times we peeked) and mold can’t grow in the dark.

What you described sounds like he may be molting. From what I read the actual molting can take a hour or so in a healthy crab. Then it takes days or weeks for them to harden their new Exo.

With an injured crab I'm not sure how long the actual molting process can take. I'm assuming it could take much longer since they can't shake it loose as easily.

Is the food you put in with him moldy too? The tank conditions make a good breeding ground for all sorts of funk. If it is mold on him it should be removed. With him possibly being mid molt he shouldn't be disturbed since he could be hurt. I would carefully remove what food is near him on the Q-tips. I'm not really sure what advice to give you about what is on his leg.