Is this a flood??

Please post here if you are having a crab care emergency! Use a real subject and not just "HELP!"
Post Reply
19 posts

Is this a flood??

Since you've come to the emergency forum, we know you want a fast answer to your question. In order for us to figure out the problem as quickly as possible, we ask that you answer the following questions as best you can. Some of them may seem odd, but they're all designed to give us the information we need to give you a good solution for your problem. The things in the [ brackets ] are there to make this post easier to read once submitted. Thanks!


1. What kind of substrate is used in your tank and how deep is it?
Play sand with some Eco Earth. About a foot or a little less.

3. Is a heat source used in the tank? If so, what?
Three heat mats with reflectix and a ceramic bulb. Also a 200 watt red bulb in the winter.

4. What types of water are available (fresh or salt) and how is the water treated (what brands of dechlorinator or salt mix and what ratio is used to mix it)?
Both water either distilled or with Prime. The salt I use is Instant Ocean.

5. What kinds of food do you feed and how often is it replaced?
All kinds. Bugs, blueberries, banana, corn, fig, bell pepper, shrimp meant for turtles, krill, and stuff from the CSJ store.

7. Has your crab molted, and how long ago did it happen?
8. What type of housing are the crabs kept in, what size is it and what kind of lid is on the housing?
Yeah, they were molting. Luna had been down for 3 months and Pinkie for over 1.

9. How many crabs are in the tank and about how large are they?
Including the two dead ones there were , ranging from jumbo to small

10. How many extra shells are usually kept in the tank, if any?
There's a bunch.

11. Have there been any fumes or chemicals near the crabitat recently?
No.

12. How often do you clean the tank and how?
I mostly just changing out the water every once in a while. I have a ton of rolly pollys cleaning the sand.

13. Are sponges used in the water dish? If so, how are they cleaned?
No

14. Has anything new been added to your crabitat recently?
No

15. Is there any other information you would like to share that might be helpful (anything that is regularly part of your crab care, playtime, bathing, etc.)?


16. Please describe the emergency situation in detail.
Alright, so this kind of started in April when I realized Georgette had been under ground too long because two of my other crabs (Goliath and Chickie) came up who had gone down after her. I decided to dig down there to find out what was going on. One crab (an E named Luna) had gone down to molt a week before and I bumped into her while looking for Georgette, but otherwise left her alone. I discovered Georgette was gone, her shell was filled with soil and most of her limbs were gone. The soil at the bottom was wetter, but there was no smell or pools of water.

So, Luna keeps molting and my other E (James) goes down to molt for a month (which is ridiculously fast since he's a large, but that's how he is) and comes back up just fine, even growing back his toes he was missing. Then my baby crab (Pinkie) goes down a month ago. Both of them seem to have been down for too long. I'd been worried about them for weeks, but today I finally decided to go digging around for them. Chickie had just gone down and I was worried that if I didn't look to see what was going on I might lose her too.

And so I found them in a similar condition to Georgette. They were a couple inches from the bottom and their shells were filled with sand. There's no trace of Luna's body and with Pinkie there's very little. They were in the same area, but far from where Georgette was. There's still no smell or pools of water, but the sand was getting pretty packed in at the bottom.

So, I just wanted to know if this could be a flood. I'm ready to put new sand in if I have to. Right now Goliath, James, and Chickie (who's in a separate critter keeper in the dark since she's molting) are homeless. So I need to know what's going on quick.

What do you mean by the sand is packed? It just needs to be sand castle consistency (as in you can build a sand castle and it can hold the form - makes for good tunnels), you would know if it's a flood because it would be pools of water.

Yeah, they get that too. I have a calcium powder and there are shells that have holes in them that they've been eating. And I've given them egg shells in the past, but not recently.

The sand felt hard and heavy. It was sandcastle consistency when I first put it in.
Top

I made a hole in the sand. It doesn't look like there's going to be water, but we'll see.

Yeah, in the summer I don't need a humidifier, but during the winter I do and it and the temperature go all over the place. So some times I end up turning it up so high that the whole thing's filled with fog, but then later or the next day it ends up being too low and the temperature's high. But there's no condensation now.
Top

There's still no water pooling, so I don't know what to think.
Top

I'm worried about adding more water to it now. I'm just so freaked out after losing half of my crabs to whatever the problem is.
Top

Yeah, there hasn't been any weird smells. I don't know about it being gray. It looks like the color it usually is.
Top

How far down were your crabs you found after digging? Were they near or in the moist area? You may not have any major flooding but enough water pooled at the bottom to make it more wet.

I would try to find a safe spot to dig where there are no crabs to disturb. Try to slowly hand scoop the substrate out in a small area of the tank. Put the substrate in a container for now. Dig until you get to the wet area. way down. Check the color of the substrate carefully. If it is a gray or darker in color than the rest of your substrate you may have a bacterial bloom.

I heard bacterial blooms can have numerous smell types from amonia, mothballs, musty basement and also tittle or no smell. We dealt with two bacterial blooms and flooding in the early spring. Removing the substrate we lost two crabs. They were both in the gray area of the substrate. While molting if they come into contact with the bactreria infested substrate the asorb the bacteria and it will kill them.

You can reuse the good portion of the substrate. The grayish substrate needs to be thrown away. When we dealt with ours we just changed all the sub out to be safe.
Coenobita Curiosities offering crabby decor
https://www.etsy.com/shop/CoenobitaCuriosities
Top

Here are a few pictures of the grayish color I am referring to. 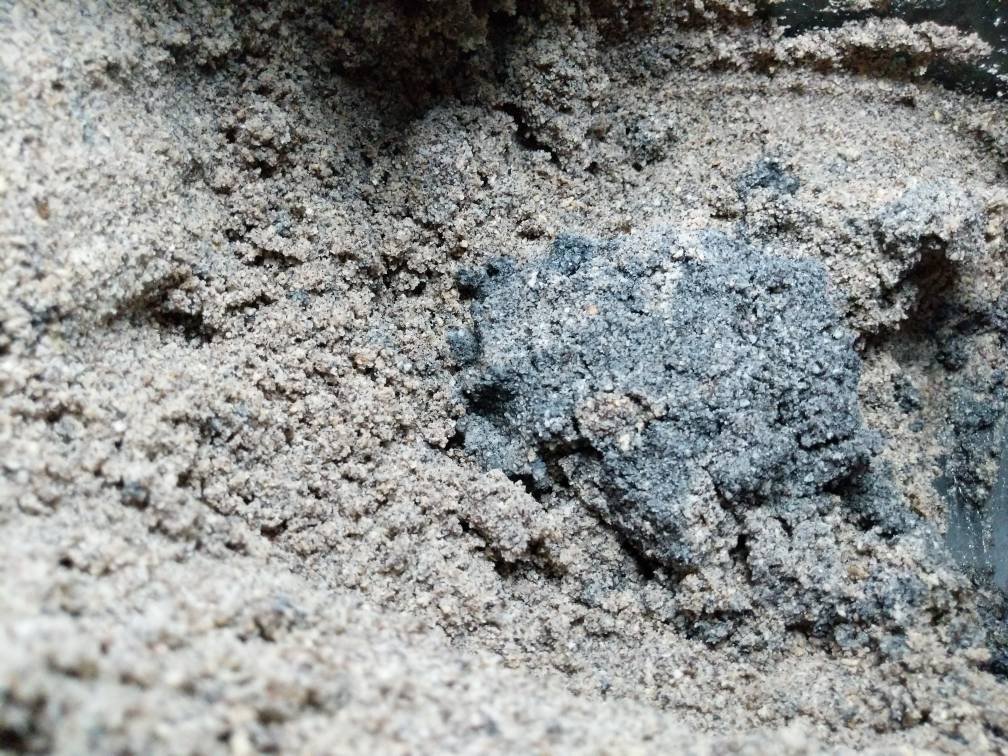 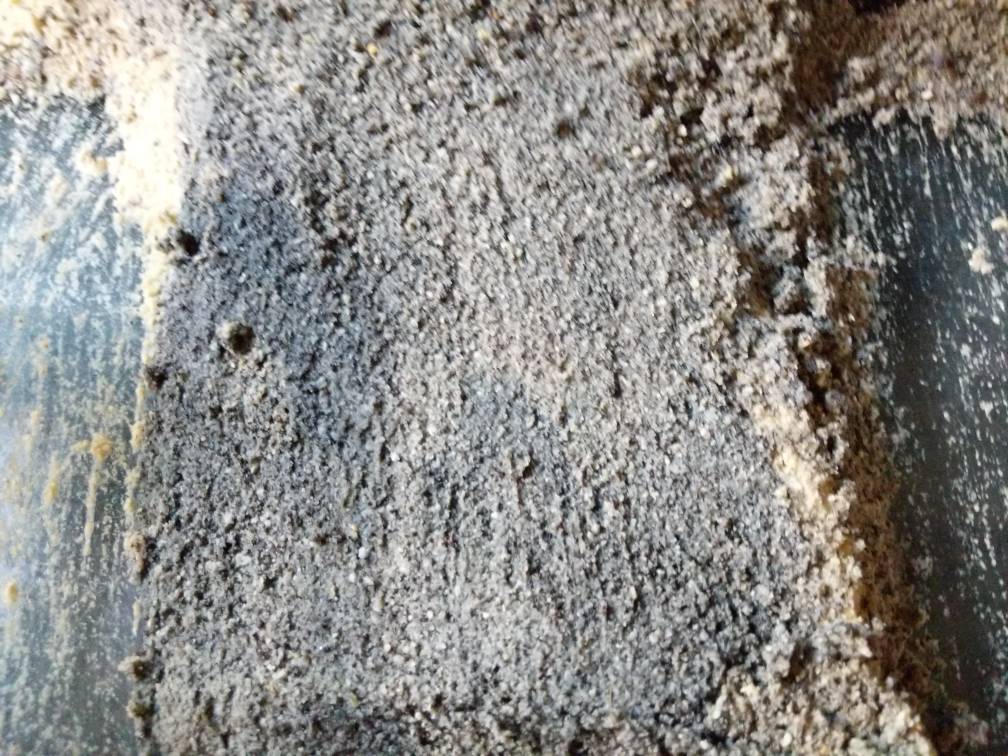 Do you use bubblers in your water or get a lot of condensation on the inside of your tank? Both of those can trigger flooding inside your tank. Then the flood brings on bacterial blooms.

I would say if you have dripping wet sand even less than an inch there is a good chance you can have a bloom in progress.

Is there any way you can post some pictures?
Coenobita Curiosities offering crabby decor
https://www.etsy.com/shop/CoenobitaCuriosities
Top

I have filters in the tank. The turtle waterfall ones. I sometimes get condensation during the winter, but now I don't even need a humidifier.

The sand isn't dripping wet, but it holds it's shape well. I tried squeezing it and nothing came out.

I don't know if you can tell much from this but 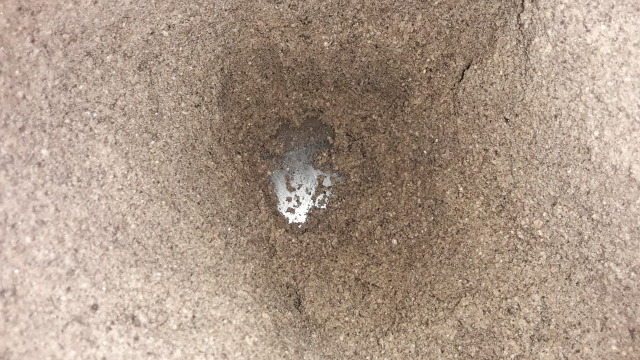 Here's the hole I dug. 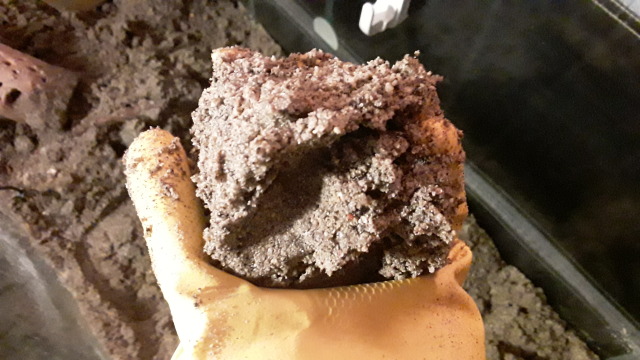 Here's sand from the bottom. 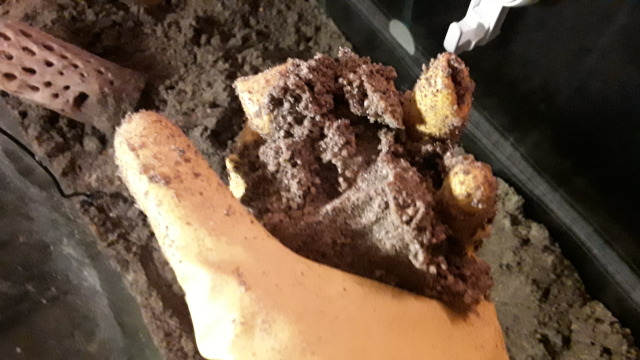 Some random sand from the top. 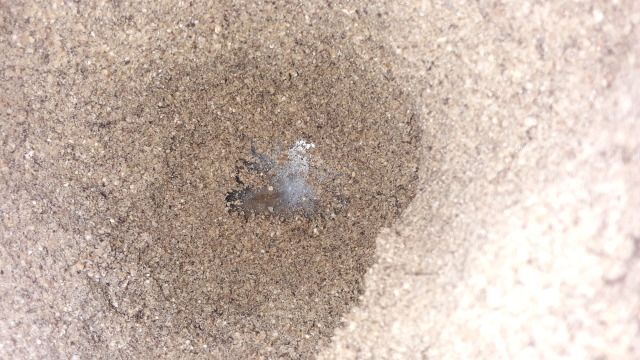 Here's the hole after some sand fell in and I moved it. You can kind of see slight condensation on the glass.
Top
Post Reply
19 posts