Please post here if you are having a crab care emergency! Use a real subject and not just "HELP!"
Post Reply
7 posts • Page 1 of 1

Since you've come to the emergency forum, we know you want a fast answer to your question. In order for us to figure out the problem as quickly as possible, we ask that you answer the following questions as best you can. Some of them may seem odd, but they're all designed to give us the information we need to give you a good solution for your problem. The things in the [ brackets ] are there to make this post easier to read once submitted. Thanks!


1. What kind of substrate is used in your tank and how deep is it? A mix of Eco-Earth coconut fiber and play sand, 5 inches deep.


5. What kinds of food do you feed and how often is it replaced? Besides the FMR Hermit Crab Food pellets that they came with, I've fed them a mix of spinach and coconut so far.


6. How long have you had the crab and what species is it, if known? About two weeks since they were bought and given to me. Purple Pinchers.


7. Has your crab molted, and how long ago did it happen? No, they haven't molted.


8. What type of housing are the crabs kept in, what size is it and what kind of lid is on the housing? 10g glass tank with a temporary & makeshift cardboard lid with small holes for air.


9. How many crabs are in the tank and about how large are they? Two of them, same size. I'd say their shells are about an inch tall.


11. Have there been any fumes or chemicals near the crabitat recently? No.


12. How often do you clean the tank and how? I haven't cleaned the tank yet.


13. Are sponges used in the water dish? If so, how are they cleaned? No sponges are used yet.


14. Has anything new been added to your crabitat recently? No.


15. Is there any other information you would like to share that might be helpful (anything that is regularly part of your crab care, playtime, bathing, etc.)? No.


16. Please describe the emergency situation in detail. My most active hermit crab was moving around the tank late last night as he usually does, and he climbed up and sat on top of this shell & palm tree decoration. That was where he was when I went to sleep, and I thought he was just resting there. I just woke up and found him in the same spot, which is weird because he usually burrows back down during the day. I tried to gently push him but it looks like he's pinching down on the decoration and can't move. Is this normal and should I just leave him to do his thing?

So the Imagitarium Salt isn't that great - and it's expensive compared to buying Instant Ocean and making it yourself. Imagitarium isn't harmful, it's just a bit lacking in the essentials last I read about it. And again, with how often you should clean out your water if it's not airated/filtered it's going to be more expensive in the long run. Do you use a dechlorinator such as Prime?

Commercial crab foods aren't the best to use. Your guys need protein and calcium - you can hard boil an egg (or serve it raw), crunch it up for them to eat, especially the shell. Fish, shrimp, raw meat, untreated with salt is also good protein. Extremely important for molting - new crabs often tend to want to molt after they destress and are placed in good conditions.

A bigger tank and 6+ inches of substrate will be good in the future, but you have a decent set up for now.

Since you just got them it's not uncommon for them to burrow to destress, and the activity could also be due to stress/exploration of their environment. Now that you've had them a while they're probably more at home and don't need to borrow to destress anymore. He could just be clinging to his favorite perch and doesn't want to let go. A lot of crabs tend to have a "Favorite" spot - mine has claimed three pieces of cholla wood set in a triangle and he shoves any other crab off the wood and out of the area if they come in.

Thanks for all the advice! I left him be for a few hours, but I started getting worried so I looked a little closer as to what he was pinching onto. Turns out, he wasn't stuck because he was pinching, but because one of his legs got stuck down into a small hole in the decoration. I was able to pry off the part of the decoration to get him out which was superglued on, thankfully. Now he's just been sitting in the same spot where I put him after that, which worries be since he seems the type to burrow away when he gets the chance. At this point, I'm just hoping he's lethargic and sleepy from being trapped all of last night and today, and that he doesn't have a broken or bent leg.
Top

I think he will be fine it was probably just a lot of stress for him. Keep a close eye on him and give him extra calcium! 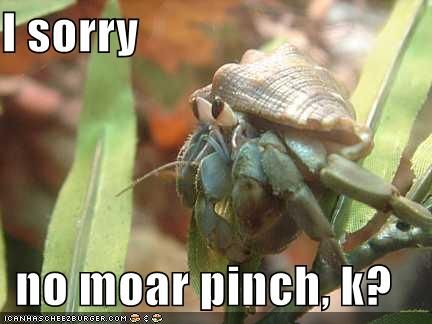 What's weird is a few weeks ago my smallest PP perched himself on a hook that held up a bridge, and he stayed there all night. I felt like this was relatable in a way, even though he wasn't hurt (he's just weird

). I hope your crabby gets better