Please post here if you are a new crab owner and someone will be along shortly to welcome you to the HCA! This is also the place to welcome new crabbies to your clan!
Post Reply
9 posts • Page 1 of 1 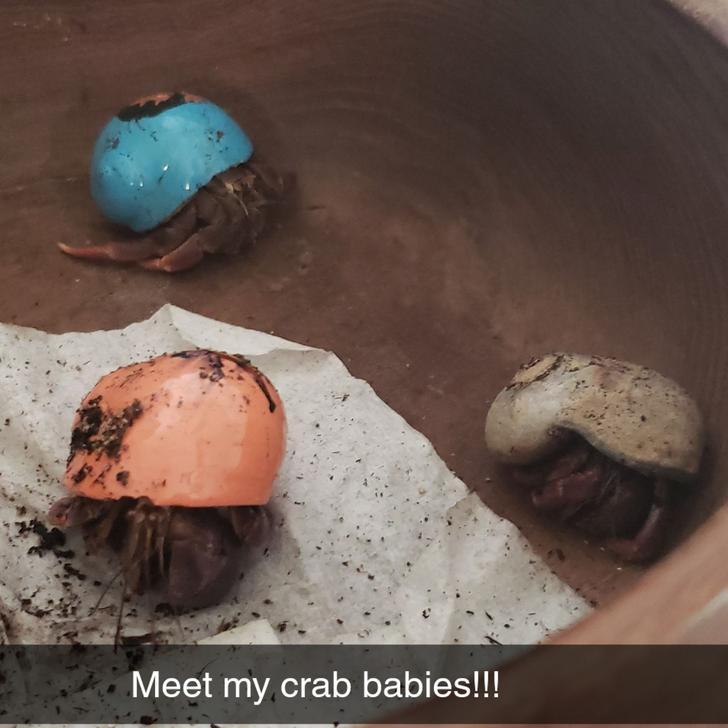 Hello! I'm brand-spankin' new. I just got my hermies on the 8th. I got three, and I'm fairly sure they're all purple pinchers. Two came in painted shells, which I'm unhappy with, but Nausicaa - my blue shelled brave baby - is big enough to swap very soon and the other one (yet unnamed) with the painted shell is my biggest and hopefully ready to switch shells soon too.

I originally got a 15gal tank, not knowing that it would be too small. However the day I came home with them I discovered this amazing forum and learned exactly how ignorant I am. So I promptly found a 40gal tank online and got it, with the plan to keep the little one as an isolation tank if needed. The UTH will arrive tomorrow morning, but despite that I switched them to the 40gal tank already because the "hermit crab pad" I got for the small tank is not warm enough and the little tank lost too much heat overnight (it got down to 60!!), whereas the big tank stayed at a solid 70, which I know is cooler than ideal but can do nothing about until tomorrow.

I have ordered shells from the Naples shell company, as I only have 4 for them to choose from right now. I have also ordered four food sample packs from HermiesKitchen and TheHealthyHermit from Etsy to discover what their favorite things are, as well as a cuttlebone, five 6-8" cholla wood pieces, and moss for a pit, which I will put in a suction-cup corner shower caddy that I found at Walmart (I need to get it still, but the other purchases seemed more important and now I'm broke til Friday lol). I gave them radish which they seemed uninterested in on the first day and green grapes yesterday, which I found chewed up this morning (yay!). I have the pellets from the pet store until the samples come, but I'm going to be giving them a variety of things between now and then. I have some shrimp that I originally bought for myself but will use for them too.

Here's my setup so far. The big dish is full of salt water, and the two smaller dishes are freshwater. The hamster wheel came with the small tank and I was going to give it away until I read that they like them on here. I'll be getting craft mesh for it in the near future. I've got plastic wrap on top of the screen, except in the middle where the two lights - which are on a 12hr timer - sit. This seems to be retaining humidity pretty well. How does it look? 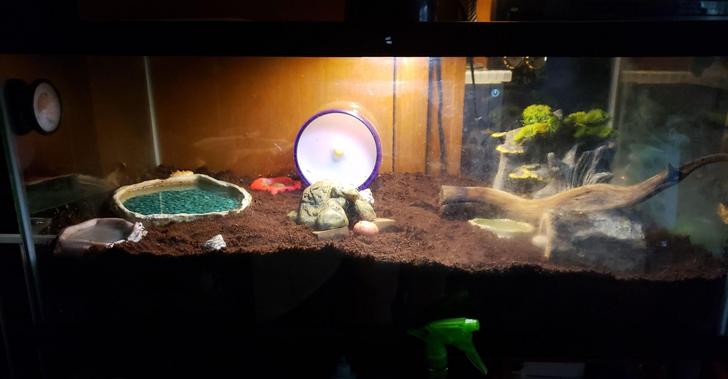 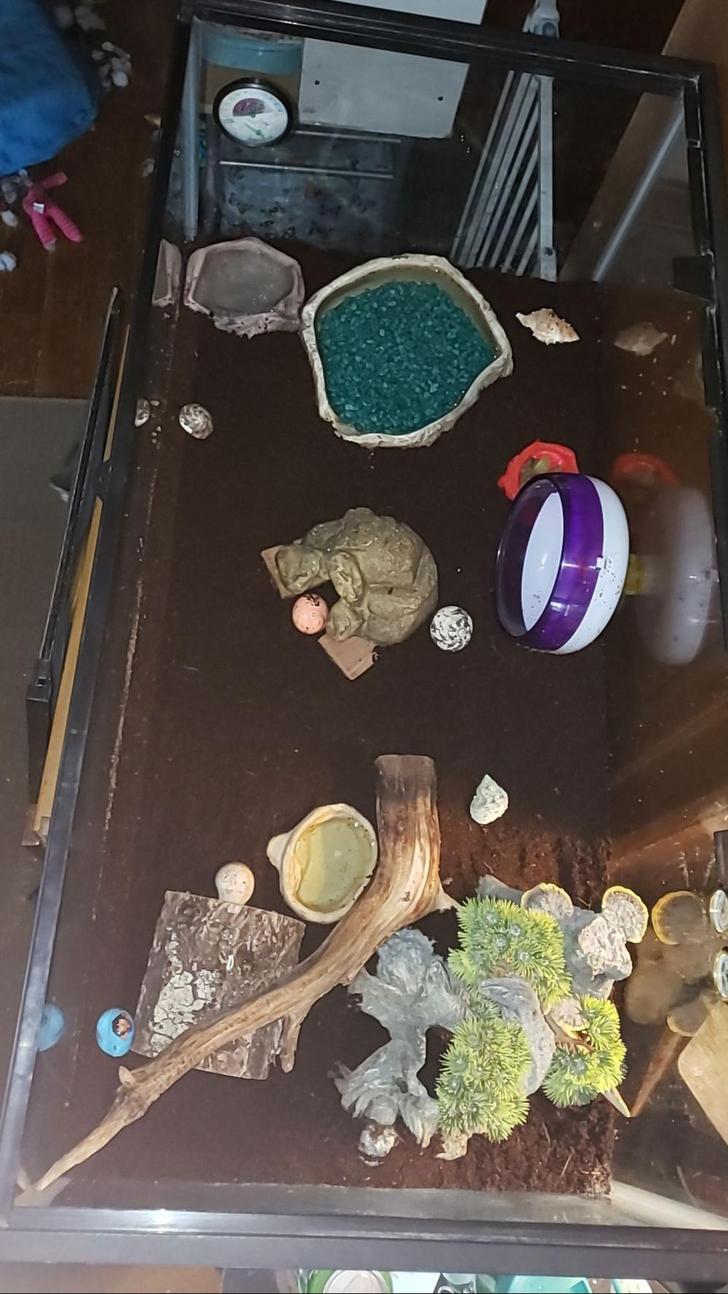 I've been reading the care sheets and some of the threads that seemed relevant already. I wish I had found this resource before getting my crabs, but I've been able to remedy my oops very quickly. I'm very excited to have my crabs and to have found this forum.
Top

You're off to a good start. Are you using dechlorinator for your waters? Instant Ocean for the salt water? We use play sand from Lowe's ($5/bag) and mix that in with the Eco earth and mix dechlorinated water til it's sandcastle consistency (don't want the tunnels to collapse on them when they dig down!) Ditch the pellets. They are not healthy. Check out the safe/unsafe food lists and the care sheets. They don't like radishes, onions, garlic and stuff like that. Looking forward to seeing all your upgrades! Welcome and happy crabbing! Oh, and you'll want to make the water dishes deep enough for your largest crab to fully submerge. Make sure they can climb out tho!

Xenocrab wrote: ↑
Sun Aug 11, 2019 2:14 pm
You're off to a good start. Are you using dechlorinator for your waters? Instant Ocean for the salt water? We use play sand from Lowe's ($5/bag) and mix that in with the Eco earth and mix dechlorinated water til it's sandcastle consistency (don't want the tunnels to collapse on them when they dig down!) Ditch the pellets. They are not healthy. Check out the safe/unsafe food lists and the care sheets. They don't like radishes, onions, garlic and stuff like that. Looking forward to seeing all your upgrades! Welcome and happy crabbing! Oh, and you'll want to make the water dishes deep enough for your largest crab to fully submerge. Make sure they can climb out tho!

I grabbed the bottles of zoo med "conditioner" specific for hermies for their water and have mixed them in according to the instructions.
I've only got eco earth substrate for the time being. I plan to mix sand in. Will probably get some when I get paid on Friday; hopefully none of my crabs will have burrowed by that point so I can mix it in. I don't know that I'll be able to do the 5:1 ratio that seems to be the most popular, but I'll see what I can do.
Yeah, I learned that about the pellets via this site. Right now I've got a grape cut into quarters and part of a hard boiled egg including the shell in there for em.
The big dish with the salt water is deep enough. The smallest dish is almost deep enough, but getting another big dish instead of using the two small ones for freshwater is the plan. I've got pebbles in the big one, forming a ramp of sorts so that there's a shallow end and a deep end.
Top

Sounds like you are on top of everything! That's great! It's always a bit much to get started, but once you have the basics (and essentials) down, it gets easier. There's all kinds of ideas and feed back on here. Have you checked out the pictures section on here yet?

It is a lot to start, but honestly what animal isn't? I've been a mammal owner my whole life so I'm keenly aware of how costly and how much of a learning curve it is to care for them. But I know once I've gotten everything completely set up the crabitat could last me til my hermies get too big (so, literal years) and once I learn their food favorites I can make my own versions of it rather than purchasing from shops. I'm positive I'll get into the swing of things.

I haven't checked out the pictures section yet. I didn't know there was one. So far I've only looked at the care sheets, some threads on humidity and heat, and a few of the other intro threads to get a better handle on things.

Once you get the natural shells, they will change! The really do prefer them!
"If there are no dogs in Heaven, then when I die I want to go where they went." -Will Rogers
Top

curlysister wrote: ↑
Sun Aug 11, 2019 4:51 pm
Welcome! Most of us got our crabs and THEN learned the proper care for them. They are addictive little creatures, LOL!
Have you checked the water care sheet? I am not sure which Zoo Med you have, but the salt water isn't correct and the dechlorinator doesn't do slime coat. Most of us use Prime as the dechlorinator, and Instant Ocean for the salt water.

Once you get the natural shells, they will change! The really do prefer them!

Thank you for this! I hadn't read this sheet yet. Do you think they will be okay until Friday with the zoo med stuff?

I look forward to this. I hate the painted shells aesthetic (one is a creepy Dora the Explorer, and the other is some kind of pirate) even aside from the fact that they are bad for them. I picked up a few shells from the pet store but they only had three that were sizes that I thought were correct. I look forward to the Naples shells arriving.
Top

Also look up Ken Lipe. He has an amazing selection of shells

While I was gone this evening they all swapped shells!! My big one (now named Naiki) swapped into the biggest shell I got at the store, Zoid (my littlest and the most shy one) swapped into the peach painted shell (unhappy about that), and Nausicaa swapped into the spiral shell. I'm very excited about this!

I've also now confirmed that Nausiaa really likes green grapes, and the egg has been eaten some yay!