For topics relating to crab care that do not fit into the other categories.
Locked
116 posts 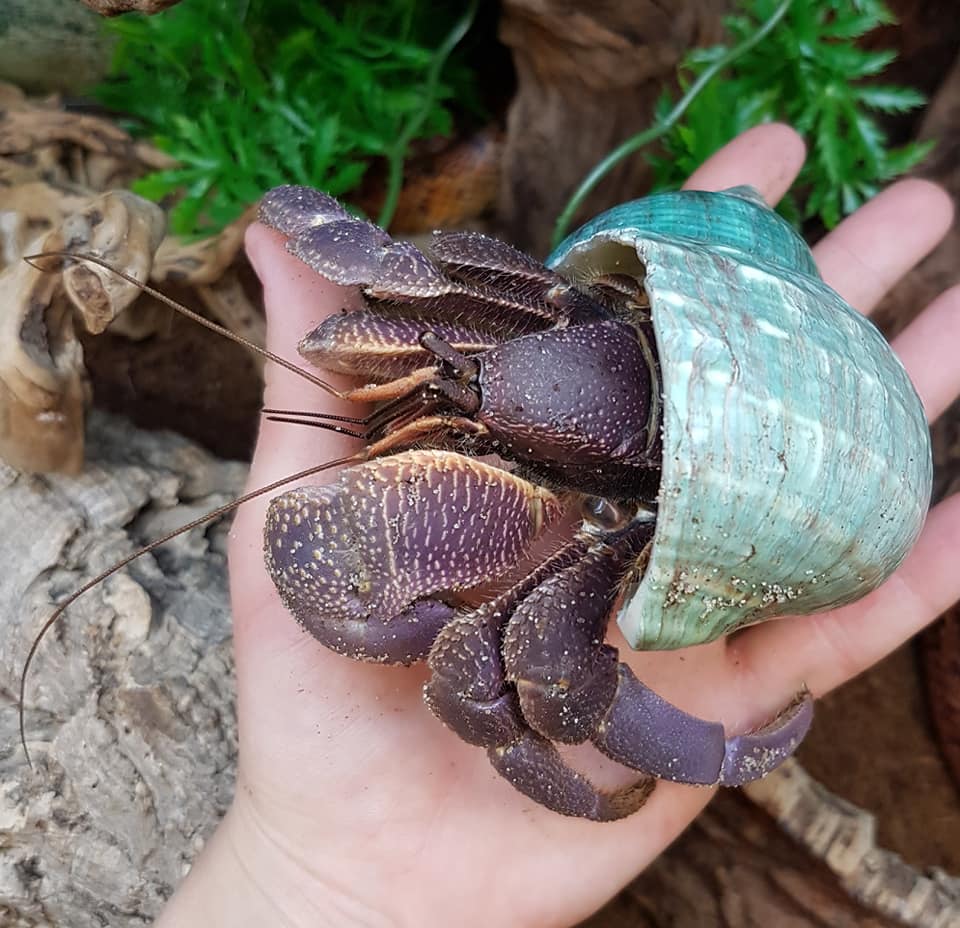 MudCrabDude wrote:Because land hermit crabs are EVIL! They're going to take over the world if you did!! Haven't you ever seen "District 9"?!?!?

Bob's reasons are his own, and not my business.

Anyway, just a thought; a good source of tiny shells (for the hermit larva to inhabit) are random bags of coral sand or coral gravel, if your petshops around there carry coral sand or coral gravel. Here where I am, (L.A. CA, USA), I generally can find some micro shells when I sift through coral sand/gravel. However, they can be a bit pricey, though, and you generally need to look through the bag before purchasing to find micro shells (sometimes, the bags are just pure sand and contain no mini shells - while other bags have loads of micro shells).

I actually kept a couple of these micro shells, in the highly unlikely event that, one day, I too find hermit larva in my water pools.

Thank you for the tip! I have found coral sand in our pet store, but the only shells that are in it are broken in many tiny pieces.. But I will look trough more bags of coral sand, and see if I can find any shells that aren't broken. ^^
I hope they do breed for you, it is so amazing!


samurai_crab wrote:What I'm really interested in is how they exactly make the transition from the ocean to land. Do they molt in the water first then have to leave the water immediately or drown, or do they hit land and then quickly molt. I'm also curious exactly how tiny we are talking when they hit the land stage. I really hope you do have success in getting them to the later stages, I know I'm rooting for you

I agree with Mudcrab, Bob's reasons are his own. Keep in mind though you aren't trying to run a business/research. Yours is purely from a hobbyist/pet owner standpoint. He may be keeping his ideas so others don't take them and attempt to get credit/publish the work first or take his information and make money off it. I don't believe Bob is in it to make money, its a hobby but it'd be a shame if someone stole all his work and made billions, which I really think you could do if you could get the crabs to breed reliably considering the babies don't have the predators they would in the ocean. I mean how many eggs did the crab lay that you had? 1000's possibly?

I am not here to discuss his reasons, they may be whatever he like. The only thing I care about is to provide my animals - whatever specie and whatever age they are - the best care I can possibly give them. So I believe most of you would understand if it feels a bit frustrating to know that someone actually has raised baby hermit crabs, but aren't willing to share his information.

Therefore I am very, very, VERY grateful to everyone here on HCA, for your help with what to feed them, and also those papers on the C. compressus babies. You're all the best!

Yeah, I think it was even more than 1000, but the babies my female hatched died the first day, since I didn't have enough salt in the water. The babies I have now are the babies I happened to hatch by mistake when I sprayed water over the eggs I took from the place where she had cleaned out her shell.

wodesorel wrote:So figure about around month in the water, and then they'll want to emerge onto land. It did specifically say that those babies who chose a shell before burying in have a much greater chance at surviving, so I guess some try to go for it naked. It said their babies were between 4mm and 6mm in size - that is some really really teeny shells!

Do you think ruggies also stay in the water for just a month too?

I don't know! All I could find free on scholar.google.com was the one regarding compressus. I don't have any memberships to be able to search for more.

Does anyone have access to a searchable archive? Maybe there's more out there since it looks like it's been done before.

SojMad, have you tried PMing kgbenson? If there's one person who might know anything about this and who may know of sources of information I think it might be him.

I know he hasn't been around in while though.
Want to see all my crazy pets? @waywardwaifs on Instagram
Top

I believe C. compressus has an abbreviated larval form, as does C. variabilis. So you may be looking at a longer time from for Rugosus but I really don't have a clue.
C. clypeatus, C. compressus, & C. perlatus
Top

I found: Yamaguchi, S., 1938. Spawning and development of Coenobita rugosus

But it's not available through my university's subscriptions. I put in a loan request. Not sure how long those take, though. Never have had to do it before.

Thank you so much for all your hard work finding the answers to all my questions!

The babies are still alive, and are now about 9½ days old.

I'm feeding them phytoplankton and artemia, though I have no idea if they actually eat the artemia.

Those tiny little animals sure hatch quickly! The instructions says 24 hours, but just after like four or five I could see some of them swimming around in their little jar of water. ^^
C. brevimanus
C. rugosus
C. clypeatus
C. cavipes
C. violascens
Top

I'm sorry I haven't been writing here in a couple of days.

Some of the babies are still alive and well, but most of them have died.

So I'm waiting for the remaining ones to die too, though they will probably live for at least another 2-4 days. I don't think they will live much longer, I'm pretty sure we're not that lucky. It's so sad, I really care for those tiny little babies.

The babies that are still alive are about 11½ days old.

Either way, what an exciting experience! You are lucky!
My son and I have been crabbing for over a year. We have 4 PP's and 6 Es.
Check out my son's blog at: http://crabsville.blogspot.com/
Top

That is such an amazing thing to have done! I'm so sorry that they're not making it.

You gave them a better shot at surviving than most of us could have done. It's really amazing that you got the chance to experience it, even if the outcome isn't they way we all hoped it would be. *hugs*
Want to see all my crazy pets? @waywardwaifs on Instagram
Top

But it will probably be more babies in the future; their parents seems very much in love. ^^ After a week apart they are now together most of their time again.

And there are still some babies alive as I said, so I'm just being negative (or realistic, I don't know.


Mama Crabs wrote:Either way, what an exciting experience! You are lucky!

Yes, it has been amazing! And if it goes as I wish, I will hopefully have many more chances to try and raise hermit crab babies!

wodesorel wrote:That is such an amazing thing to have done! I'm so sorry that they're not making it.

You gave them a better shot at surviving than most of us could have done. It's really amazing that you got the chance to experience it, even if the outcome isn't they way we all hoped it would be. *hugs*

), and I'm also so grateful to my hermit crabs who has given me this experience - unintentionally of course, but still.. This has really been fantastic. ^^ They have both given me the best confirmation (<- right word?) I could get that I am doing something right about their care, and an amazing opportunity to study hermit crabs in their first stages of life - and to learn more about them.

So even though I'm really sad that the babies aren't making it, I'm still happy for so many reasons. ^^

There are still a few (like 20-30 or so) babies that are still alive and really active, but that is probably way to few to make it trough a month, plus molting into a hermit crab and all, so my hopes are not that high on these babies. But next time (if I am so lucky), or, if that doesn't work, the time after that, and so on. I won't stop trying, that's for sure.

And I will of course keep you all updated to the last baby.

Its sad that a lot of them have died, but it is an incredible experience. Don't give up hope on the remaining 20-30, you're half way there to having them a month. Sunday will be 2 weeks right? I'm happy the remaining ones are still active, that is a good sign, do they seem like they are growing? You never know, you might have to get a huge tank someday soon because you have 30 more hermit crabs! LOL! Thank you for the updates, I have really enjoyed reading about your experience with the babies.
7 PP's, 5 crazy E's!
Crabby since 2007
Top

I second not giving up yet! When my cory catfish laid eggs, only one out of all the eggs survived! It grew to be regular size. It might just happen with you!