This is where you discuss the conditions of your crabitat -- temperature, humidity, substrate, decorating, etc.
Post Reply
20 posts

I've had my 4 hermies for about a month now. After thinking a 10g tank was fine (per the guy at the pet store :roll: ) I quickly realized I needed to upgrade. I opted for the 29g and have spent the last few weeks getting it ready. I swear I felt like an architect/engineer trying to measure everything out pre-installation, installing the egg crate, making the pools, made my own jute rope bridge, made an extra 'hideout' with a tupperware container, hamster wheel, etc. It's been a process and I'm pretty sure my husband wanted to kill me when I was constantly coming home from the store with new things

I'm going to attempt to post pictures below but not sure if they'll show up. I'm using Photo bucket but I see something that mentions there will be a watermark on them. No clue what the watermark will look like until I post I think? But assuming they show up, I'd love some feedback or advice if you see something I could be doing better.

Some details of the tank:
* 7-8 inches of substrate (play sand mixed with cocofiber)
* two pools (fresh and salt) deep enough for them to submerge with rocks inside and craft mesh ramps
* bubblers in the pools
* Moss pit above the water pools
* Hamster wheel for fun
* Two hideout huts on the ground level and one hanging (I made it out of tupperware)
* Added climbing wall and other hanging plants to help them climb up to higher levels
* Bean farm heat mats on the back of the tank

A couple of questions....
1. I calibrated my hygrometer and it was about 3% off from the ideal 75% humidity for table salt, so I know I need the humidity in my tank to show no less than 83% on the hygrometer. When I first put the tank fully together and added the bubblers, moss, etc. the humidity got up to 90%. Now I'm barely hitting 80%. I'm not sure what else I can do since I'm already doing the moss and bubblers. Any other ideas? The substrate seems fine - it's sandcastle consistency and when I stick a pencil in it, it doesn't cave in.

2. I bought some 1L water jugs because I felt like my gallon jugs that I was pre-making for the salt and freshwater were sitting for too long before using them fully. But now I'm struggling with the dose of Prime for 1L. After googling it looks like .025ml but how on earth do I measure that out? I bought an eye dropper and did a teeny tiny drop hoping that it was .025ml but there's no way to know for sure. Anyone have a better solution?

3. I still have 1 hermie in the 10g tank. He (she?) has been buried since the day we brought them home. How long until I get worried? I know not to dig it up, so it will stay in there for as long as it needs, but I really want to move him over because the new tank is SO much better. No bad smells or anything in the tank, so I'm guessing he/she is fine and maybe molting?

4. The three crabs that I did move over are all huddled together in the back right corner and don't seem to have moved much in days. In the mornings I can sometimes see that food has moved around so I'm sure they're eating at night, but should I be worried they're not more active? I also find it odd that where they're huddled, they semi dug down - basically just kicked some substrate around but are still pretty much on top of it. If they were stressed, wouldn't they dig completely down and bury? How do I know if the substrate is too hard for them to dig down in? I'm able to stick a pencil in it so I think it's ok but I can't help but worry.

5. Can the bubblers be too strong? I'm worried the "current" they create might deter the crabs from going in? Since I never see them over there, I'm not really sure if they're going in or not. Also, how often do I need to change out the water when i'm using bubblers?

6. I think the temp is ok but want to double check. I got a thermostat along with the hygrometer/thermometer and both are at the front of the tank - in different corners - and never get below 80 degrees. Since the mats are at the back, I assume it's probably closer to 85-87 degrees in the back. Is lower 80's ok for the front of the tank? Or should I insulate the mats to try to get the heat up a bit?

Ok, now on to pictures. Hopefully these work!!

** Edit: Was able to get pictures to work via Dropbox! Pics in a comment but also trying to re-add them here. (yes, I have a lid. Just not here in order to take decent pictures)

Yeah, Tapatalk is the main thing to use for pictures.

1. Not completely sure what's going on, but 80% humidity isn't bad either. Your crabs can 100% do fine in this humidity, but I am concerned that if it's already dropped, it may drop even more. You will probably need a person with more experience to answer this one.

2. Measurements do not have to be completely accurate, just make sure you don't put less than the amount of Prime you need. Also don't put 5 times as much Prime as you need, just close enough to the measurement because the measurements can be pretty tiny at times.

3. Depending on the size of the crab, I would probably say for smalls 3 months and then for larger crabs 8 months or so.

4. If you have all the substrate you need, it's really up to the crabs to dig down or not. They're probably just getting used to the crabitat, but not sure why they aren't burrowing either.

5. I think the bubblers are just fine. Hermit crabs are used to the ocean's currents which can be really strong, so bubblers shouldn't pose too much of an issue because most hermit crabs in captivity are wild-caught.

6. That temperature is completely fine. Most crab owners aim for 85 degrees, but as long as you don't have less than 80 degrees you should be fine.

I'm not an expert, so some information here may(probably) be incorrect. I tried, though. Good luck on your journey!
Top

Forgot I had a dropbox account, so testing that....

(Also, there is a lid. It just wasn't on when i was taking pictures)

You could try imgur if you can't use Tapatalk
Top

You could try imgur if you can't use Tapatalk

Darn, you're not seeing them? I see them in the thread now whereas before (when using Photo bucket) I saw an error image.
Mom to a 5 year old wild child, 1 dog, 2 cats and 4 hermit crabs :-)
Top

Yeah, All I see is the picture you get when an image isn't loaded where it's like a piece of paper with a green hill and a cloud and next to it is the words Image. Sorta weird.
Top

Ok trying with Imgur (I couldn't figure out Tapatalk. I'm sure it's just user error lol) 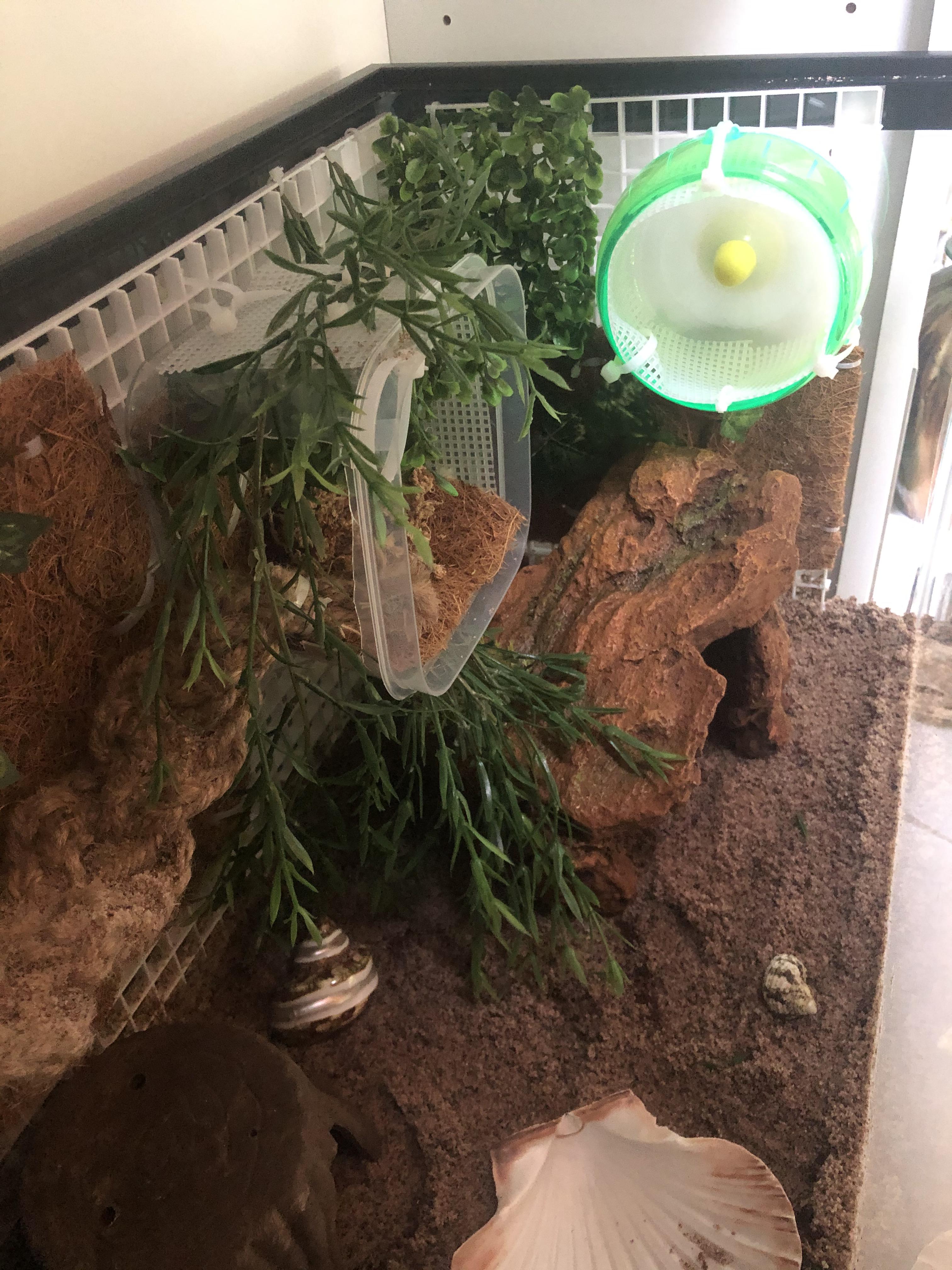 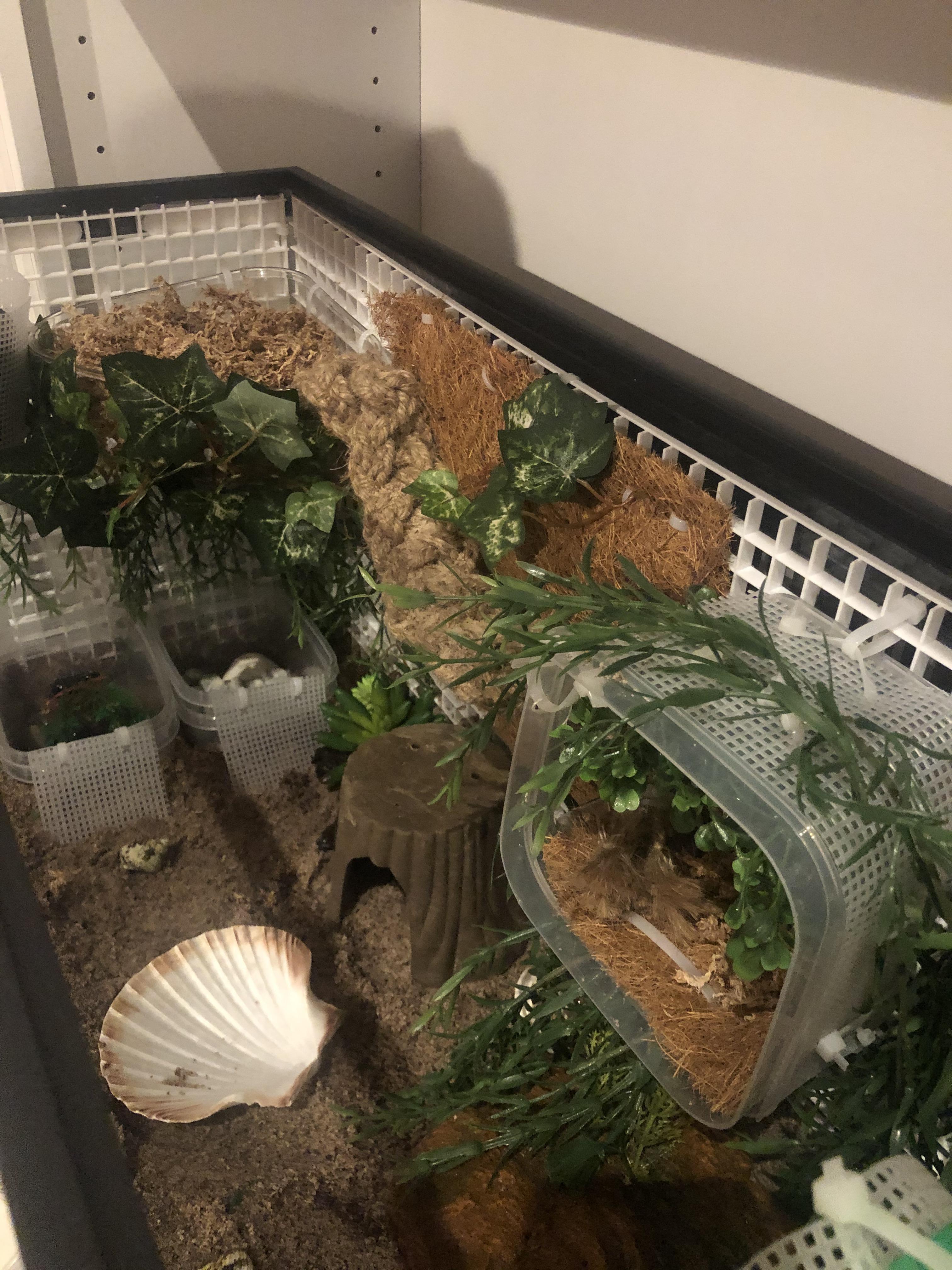 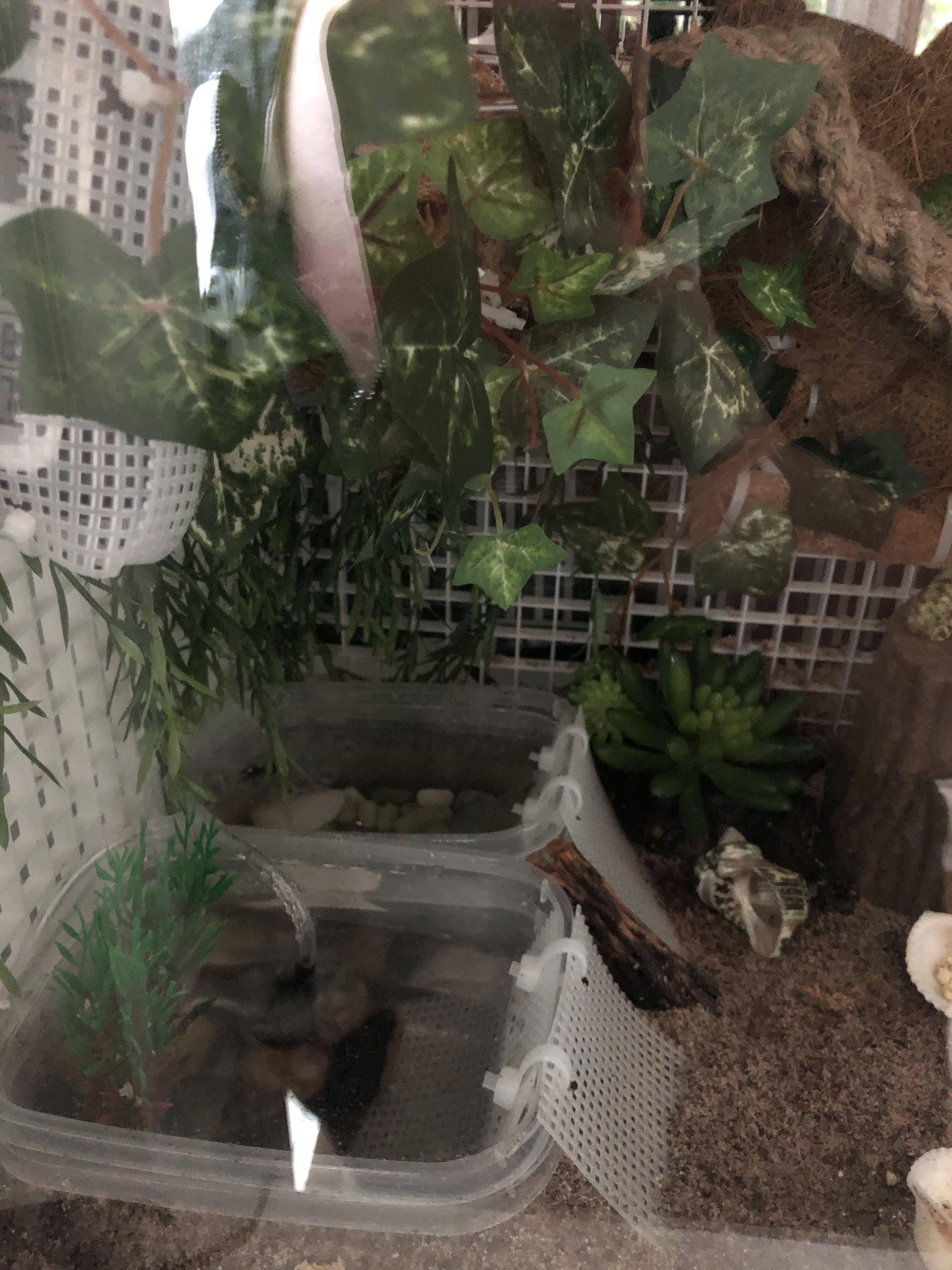 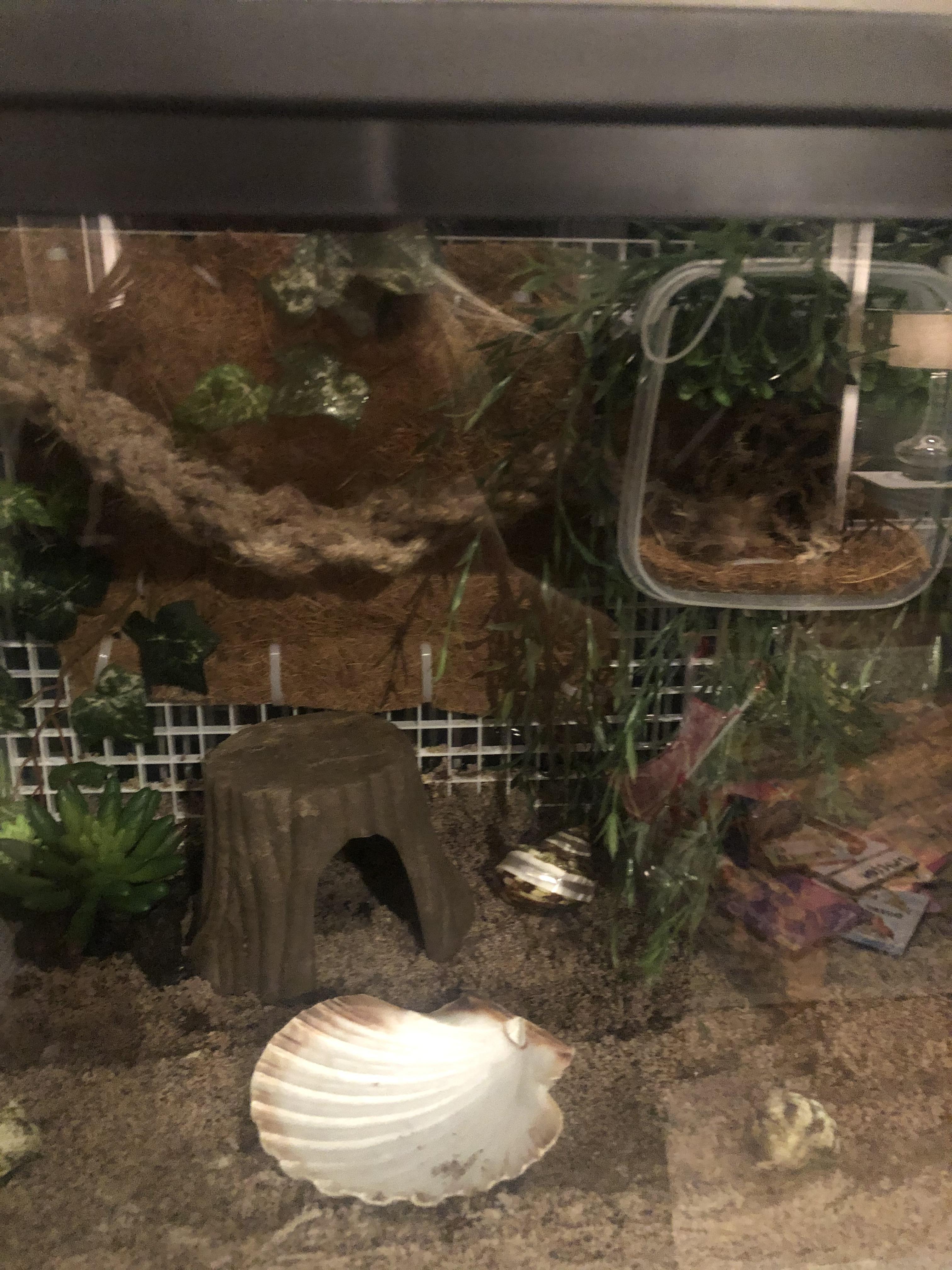 Yayyyy so glad it worked! Thank you for your help and patience with my learning curve haha

I freaking love your Tupperware hidy invention!!! Did your own brain think that up, or have you seen that somewhere else? Because that's a first for me!

Sent from my cp3705AS using Tapatalk

Wow, it certainly is a nice crabitat! Love all the foliage you have in there.

I love it all! Very inspiring! I love seeing new ways to decorate and upgrade.
Top
Post Reply
20 posts